Josh Shapiro: The Will of the People and Our Electoral System 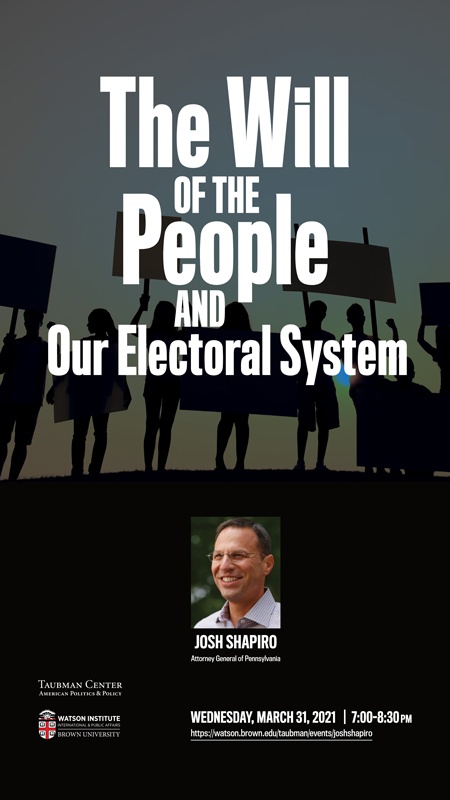 Josh Shapiro has been Attorney General of the Commonwealth of Pennsylvania since 2017 and was elected to a second term in November 2020.

AG Shapiro served as a State Representative from 2004 to 2012 and as Chair of the Montgomery County (PA) Board of Commissioners.

His early career included work on Capitol Hill as Chief of Staff to Pennsylvania Congressman Joe Hoeffel from 1999-2003 and on the staffs of Congressman Peter Deutsch (D-FL) and Senators Robert Torricelli (D-NJ) and Carl Levin (D-MI).

Over recent months, in the wake of the 2020 election, Shapiro as Attorney General of key contested swing state, Pennsylvania, stood at the center of the storm created by President Donald Trump’s refusal to accept the outcome of the election.

In a conversation with Taubman Center’s Interim Director Richard Arenberg, he will talk about that experience, the attack on the U.S. Capitol, the impeachment trial leading to Donald Trump’s acquittal, what was at stake for his state and for the nation and what now needs to be done.

Shapiro has called the Electoral College "a system that no longer has a safety valve" and called for its reform. He declared, "We can no longer afford a system where the will of the people is ever questioned again."