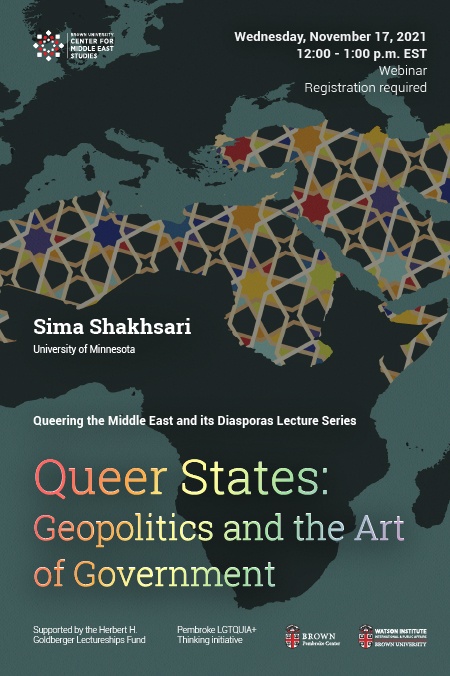 In this talk, Shakhsari grapples with the study of the state in the Middle East and argues that as contradictory and transnational assemblages of multi-layered institutions, people, and practices, states should neither be reduced to monolithic institutions with vertical authority over civil society in bounded territories, nor should they be aggrandized as sole arbitrators of violence. Unhinging queerness from sexual identity or injury inflicted by the territorial state, Shakhsari shows that state is only one among many entities that govern queer bodies. Drawing from the anthropology of state and their own ethnographic research on the management of life and death of Iranian queer and trans refugees by refugee regimes, shakhsari argues that rather than a normative approach to states as abstract bureaucratic institutions ranked on a scale of “authoritarianism” to “liberal democracy, the scholarship on state and queerness in the Middle East needs to go beyond theorizing state solely through the logic of rights or visibility.  Instead, Shakhsari suggests, we must pay attention to the geopolitical constitution of states and restructurings of authority that follow neoliberal discourses of “good governance,” securitization, “democratization,” and “freedom." Borrowing from queer theory while unhinging it from its Euro-American epistemological grounding, and challenging comparative models wherein “liberal democratic” states become the yardstick against which other states are measured for their queer rights, Shakhsari suggests that "failed states" may indeed be "queer states."

Sima Shakhsari is an associate professor in the Department of Gender, Women & Sexuality Studies at the University of Minnesota and the author of Politics of Rightful Killing: Civil Society, Gender, and Sexuality in Weblogistan (Duke, 2020).

Sima Shakhsari is an associate professor in the Department of Gender, Women & Sexualities Studies at the University of Minnesota. They are interested in transnational feminist theory, transnational sexuality studies, non-Eurocentric queer and transgender studies, Middle East studies, empire, militarism, neoliberal governmentality, biopolitics, digital media, refugees, diasporas, and political anthropology. They earned their PhD in Cultural and Social Anthropology at Stanford University and have held postdoctoral positions at the University of Pennsylvania’s Wolf Humanities Center and the Women’s and Gender Studies Department at the University of Houston. Shakhsari was an assistant professor of Gender, Women, and Sexuality Studies at Wellesley College before joining GWSS at UMN in 2016, and has a long history of activism at queer and women’s organizations in the San Francisco Bay Area. Their book, titled "Politics of Rightful Killing: Civil Society, Gender, and Sexuality in Weblogistan" (Duke University Press, 2020), provides an analysis of Weblogistan as a site of cybergovernmentality where simultaneously national and neoliberal gendered subjectivities are produced through online and offline heteronormative disciplining and normalizing techniques, and where loaned life is subjected to a pending death in the name of rights. Shakhsari is currently working on their second book manuscript, tentatively titled “Moving Queers & Queer Moves: Deterritorialization and Loaned Life.” The project combines ethnographic research among Iranian queer and transgender refugees and refugee rights organizations with the analyses of queer diasporic literature, films, theater, and activist organizations to extend the concept of loaned life and explore the way that Iranian transgender refugees are nationalized/denationalized, sexed, gendered, and raced in multiple re-territorializations as they shuttle between rightfulness and rightlessness, and as they transition from the naturalized domains of sexuality and citizenship to zones of indeterminacy. Shakhsari is the anthropology, sociology, and gender studies book review editor of the International Journal of Middle East Studies, an editorial collective member of AGITATE!, an editorial team member of MERIP. and a co-convener of the Imagining Transnational Solidarities Research Circle.