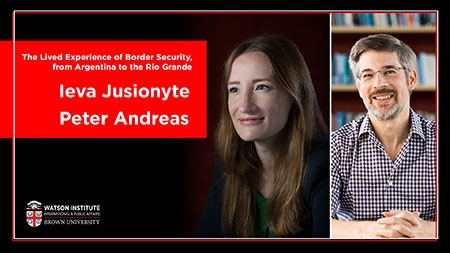 Tune in to the conversation starting Monday, April 19 at 10 a.m.

During this Watson Faculty Research Series event, political scientist Peter Andreas welcomes anthropologist Ieva Jusionyte to Brown's Watson Institute, and talks to her about her years of ethnographic work on border security. They discuss her ongoing research, including embedding herself with local journalists in the remote Triborder Area of South America, working as a first responder aiding migrants on the Arizona-Sonora line, and more recently following the flow of U.S. firearms smuggled into Mexico.

Peter Andreas is the John Hay Professor of International Studies at Brown's Watson Institute. His research bridges the study of security, political economy, and transnational crime, and is the author, co-author, or co-editor of eleven books. His most recent book, Killer High: A History of War in Six Drugs, explores the relationship between warfare and mind altering substances, from ancient times to the present.

Ieva Jusionyte is the Watson Family Associate Professor of International Security and Anthropology at Brown University. Her research and teaching interests lie at the intersection of political-legal and medical anthropology. She is the author of two books: Savage Frontier: Making News and Security on the Argentine Border and Threshold: Emergency Responders on the U.S.-Mexico Border.