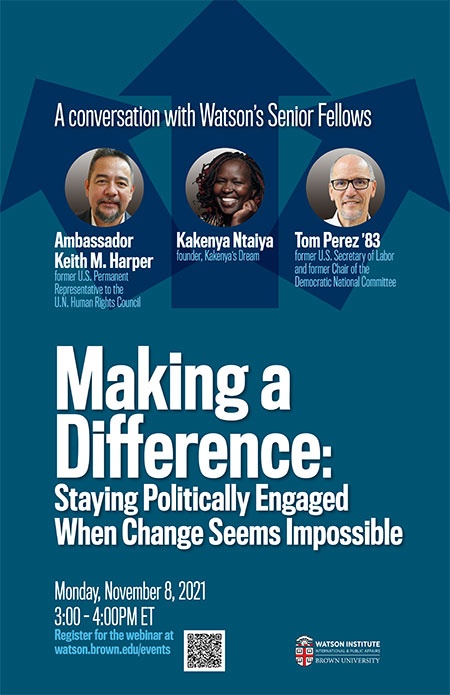 Register here to attend the webinar, or watch live on Watson's YouTube channel.

Join Watson's senior fellows, Keith Harper, Kakenya Ntaiya, and Tom Perez for discussion about increasing and strengthening political engagement. Each fellow is hosting a student study group at Watson this semester, and will expand on the themes of their group during this conversation. Keith Harper's group is studying "Promoting Human Rights in an Increasingly Challenging and Autocratic World;" Kakenya Ntaiya leads "Girls' Education and Gender Equality;" and Tom Perez's group focuses on "Leadership and Governance in Challenging Times."

From 2010 to 2014, Ambassador Harper served as Commissioner on the President’s Commission on White House Fellowships.  He also served as a chair for Native American policy in the 2008 Obama for America presidential campaign and then as a member of the Obama-Biden Presidential Transition Team in the Energy and Environment Cluster.  Ambassador Harper was previously Senior Staff Attorney and head of the Washington, DC office of the Native American Rights Fund (NARF) from 1995 to 2006. During his tenure at NARF, he also taught Federal Indian Law as an adjunct professor at Catholic University, Columbus School of Law and at American University Washington College of Law.  Ambassador Harper served as a Supreme Court Justice on the Supreme Court of the Poarch Band of Creek Indians from 2007 to 2008 and as an Appellate Justice on the Mashantucket Pequot Tribal Court from 2001 to 2007.

Engaged at age 5, Dr. Kakenya Ntaiya experienced female genital mutilation (FGM) as a young teenager in preparation for child marriage. Her life was set to follow the traditional Maasai path of ending school to become a wife and mother, but Dr. Ntaiya had a different dream. She negotiated with her father to return to school after surviving FGM. When she was accepted to college in the United States, she promised her community she would use her education to serve her rural Kenyan village in exchange for their support. She went on to earn her PhD in education from the University of Pittsburgh and returned to her community to fulfill her promise.

The son of immigrants from the Dominican Republic, Tom Perez ’83 grew up in Buffalo where he learned the values of a union town: hard work, integrity, service, and perseverance. After putting himself through college with Pell Grants and working on the back of a garbage truck, Tom passed up offers from white-shoe law firms, instead choosing to start his career as a civil rights attorney for the U.S. Justice Department prosecuting racially motivated hate crimes.

Tom had the privilege of serving in President Obama’s administration. First as head of the department’s Civil Rights Division, where he led the charge against police misconduct, voter suppression, anti-LGBT discrimination, and immigrant-bashing sheriffs’ departments. Then as Secretary of Labor, fighting to protect and expand opportunities for America’s working people – from better wages and overtime pay, to retirement security and collective bargaining rights. In 2017, Perez was elected as Chairman of the Democratic National Committee.