Ümit Kurt ─ The Armenians of Aintab: The Economics of Genocide in an Ottoman Province 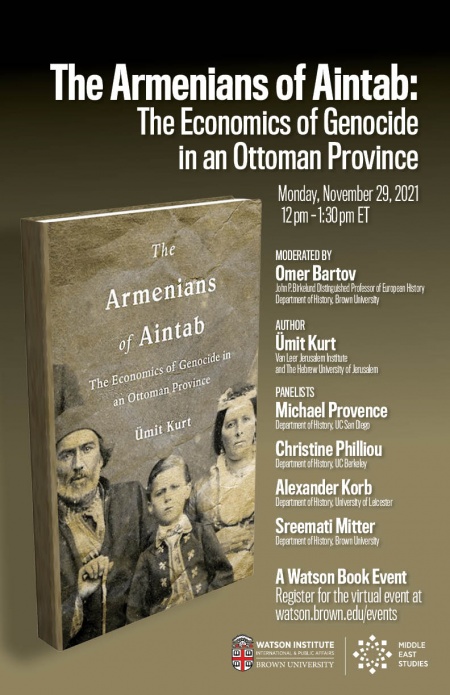 Ümit Kurt, born and raised in Gaziantep, Turkey, was astonished to learn that his hometown once had a large and active Armenian community. The Armenian presence in Aintab, the city’s name during the Ottoman period, had not only been destroyed—it had been replaced. To every appearance, Gaziantep was a typical Turkish city.

Kurt digs into the details of the Armenian dispossession that produced the homogeneously Turkish city in which he grew up. In particular, he examines the population that gained from ethnic cleansing. Records of land confiscation and population transfer demonstrate just how much new wealth became available when the prosperous Armenians—who were active in manufacturing, agricultural production, and trade—were ejected. Although the official rationale for the removal of the Armenians was that the group posed a threat of rebellion, Kurt shows that the prospect of material gain was a key motivator of support for the Armenian genocide among the local Muslim gentry and the Turkish public. Those who benefited most—provincial elites, wealthy landowners, state officials, and merchants who accumulated Armenian capital—in turn financed the nationalist movement that brought the modern Turkish republic into being. The economic elite of Aintab was thus reconstituted along both ethnic and political lines.

The Armenians of Aintab draws on primary sources from Armenian, Ottoman, Turkish, British, and French archives, as well as memoirs, personal papers, oral accounts, and newly discovered property-liquidation records. Together they provide an invaluable account of genocide at ground level.

Ümit Kurt a historian of the modern Middle East, with a research focus on the collapse of the Ottoman Empire. He specializes in the late Ottoman socio-economic history, Armenian genocide, mass/collective violence and interethnic conflicts. His broader training also includes the comparative empires, population movements, history of the Ottoman urban and local elites, wealth transfer and nationalism.

His research focuses on the elite-making process that have been largely absent from historical writings on the Middle East. By situating the physical and material destruction of Armenians within context of the creation/construction of Turkish-Muslim urban elite in Aintab, modern day Gaziantep, his work provides a comparative case for the elite formation and its social repercussions in the Eastern Mediterranean. His work shows that within the crucible of the Young Turk Revolution of 1908, World War I, and the advent of late European colonialism, a discrete urban bourgeoisie elite/class took shape. It was defined not just by the wealth, professions, possessions, or the levels of education of its members, but also by the way they acquire this wealth and status which was at the expense of Armenian Christians. In this way, he contributes to the global historiographies of state and nation formation, elite and bourgeoisie making processes, economic nationalization, and collective violence.