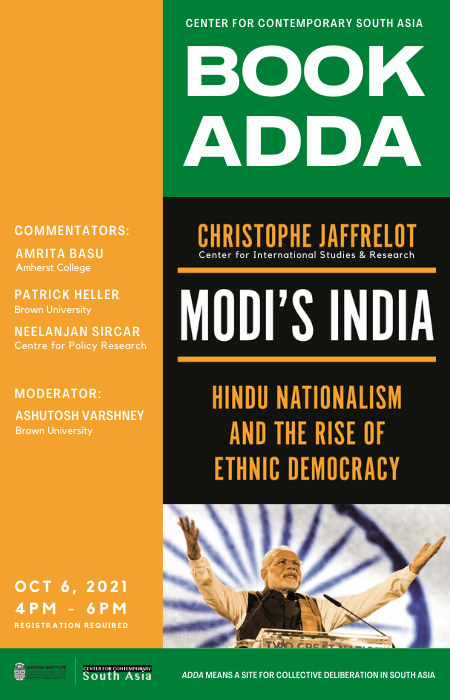 About the book: A riveting account of how a popularly elected leader has steered the world's largest democracy toward authoritarianism and intolerance.

Over the past two decades, thanks to Narendra Modi, Hindu nationalism has been coupled with a form of national-populism that has ensured its success at the polls, first in Gujarat and then in India at large. Modi managed to seduce a substantial number of citizens by promising them development and polarizing the electorate along ethno-religious lines. Both facets of this national-populism found expression in a highly personalized political style as Modi related directly to the voters through all kinds of channels of communication in order to saturate the public space.

Drawing on original interviews conducted across India, Christophe Jaffrelot shows how Modi's government has moved India toward a new form of democracy, an ethnic democracy that equates the majoritarian community with the nation and relegates Muslims and Christians to second-class citizens who are harassed by vigilante groups. He discusses how the promotion of Hindu nationalism has resulted in attacks against secularists, intellectuals, universities, and NGOs. Jaffrelot explains how the political system of India has acquired authoritarian features for other reasons, too. Eager to govern not only in New Delhi, but also in the states, the government has centralized power at the expense of federalism and undermined institutions that were part of the checks and balances, including India's Supreme Court.

Modi's India is a sobering account of how a once-vibrant democracy can go wrong when a government backed by popular consent suppresses dissent while growing increasingly intolerant of ethnic and religious minorities.

Christophe Jaffrelot is a senior research fellow at the Center for International Studies and Research (CERI) at Sciences Po in Paris. His core research focuses on theories of nationalism and democracy, mobilization of the lower castes and Dalits (ex-untouchables) in India, the Hindu nationalist movement, and ethnic conflicts in Pakistan.He teaches at Sciences Po and part-time in the United States (Columbia, Princeton, John Hopkins, and Yale). He is also professor of Indian politics and sociology at the King’s India Institute and King’s College, London.

Previously, Jaffrelot served as director (2000–2008) and deputy director (1997–2000) of CERI. He is also former editor in chief (1998-2003) and director (2003–2008) of the quarterly journal Critique Internationale. Jaffrelot joined the National Center for Scientific Research (CNRS) in 1991 and was awarded the CNRS bronze medal in 1993. He became a CNRS senior research fellow of second class in 2002 and senior research fellow of first class in 2008. He was awarded the 2014 Ramnath Goenka Award for Excellence in Journalism in commentary/interpretive writing.

Jaffrelot is the author of six books including, Religion, Caste and Politics in India (Columbia University Press, 2011), and has edited seventeen volumes, including Pakistan: Nationalism Without a Nation? (Manohar and Zed Books, 2002).