The Past and Future of India-China Relations 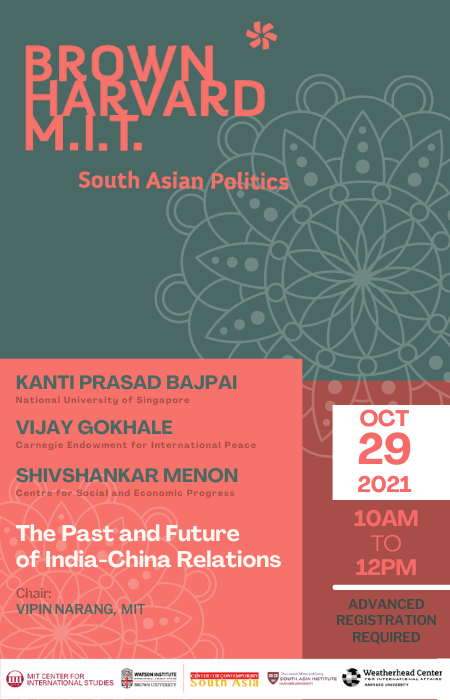 Vijay Gokhale is a nonresident senior fellow at Carnegie India. Mr. Gokhale retired from the Indian Foreign Service in January 2020 after a diplomatic career that spanned thirty-nine years. From January 2018 to January 2020, he served as the foreign secretary of India. Prior to his term as foreign secretary, Mr. Gokhale had served as India’s high commissioner to Malaysia from January 2010 to October 2013, as ambassador of India to the Federal Republic of Germany from October 2013 to January 2016, and as ambassador of India to the People’s Republic of China from January 2016 to October 2017. He has served as head of the India-Taipei Association, in Taiwan, from July 2003 to January 2007. During his time in the headquarters of the Ministry of External Affairs, he has also worked in key positions in the East Asia Division, including as the joint secretary (Director General) for East Asia from March 2007 to December 2009.

Shivshankar Menon is a Distinguished Fellow at CSEP and a Visiting Professor at Ashoka University. His long career in public service spans diplomacy, national security, atomic energy, disarmament policy, and India’s relations with its neighbours and major global powers. Menon served as national security advisor to the Indian Prime Minister from January 2010 to May 2014. He currently serves as chairman of the advisory board of the Institute of Chinese Studies in New Delhi. He was also a Distinguished Fellow with Brookings India. He is the author of “Choices: Inside the Making of Indian Foreign Policy” published by the Brookings Press and Penguin Random House in 2016. His new book, “India and Asian Geopolitics; The Past, Present” is likely to be out in 2021.

Kanti Prasad Bajpai is a Professor of Asian Studies at Lee Kuan Yew School of Public Policy and the Director of the Centre on Asia and Globalisation. Bajpai is an expert on a range of policy issues, including international relations theory, international security, regional cooperation in South Asia, and Indian security and foreign policy. Previously, he was Professor of International Politics, Jawaharlal Nehru University and Professor in the Politics and International Relations of South Asia, Oxford University. From 2003 to 2009, he was Headmaster, The Doon School, India. He taught at the Maharajah Sayajirao University of Baroda, and has held visiting appointments at Wesleyan University, Columbia University, and the University of Illinois, Urbana-Champaign. He has also held visiting appointments at the Rajiv Gandhi Foundation, Joan B. Kroc Institute for Peace, Notre Dame University, the Brookings Institution, and the Australian Defence Force Academy. Most recently, he was Distinguished Fellow, Institute for Defence Studies and Analyses, New Delhi. Kanti writes a regular column for the Times of India (New Delhi).