Rating politics: The impact of politics and policy choice on sovereign credit ratings 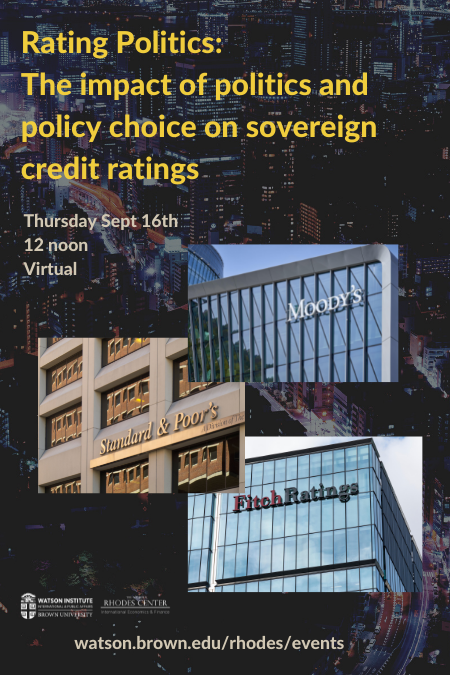 How do credit rating agencies (CRAs) judge the creditworthiness of countries? The importance of this question reaches well beyond the academic realm. As arbiters of sovereign creditworthiness, the three largest credit rating agencies (Moody’s, Standard and Poor’s and Fitch) influence the risk premium countries have to pay on their debt, while they also affect the stability of financial markets due to their central role in the international financial regulatory framework. ‘Rating Politics’ fills the gap in our understanding of sovereign credit ratings and explains how CRAs’ make decisions that bear on national sovereignty as well as economic and financial stability across the world. It argues that the sets of incentives generated by the peculiar position that CRAs occupy at the interface of markets and supranational governance induce CRAs to adopt models and modi operandi that introduce systematic bias both into politics and financial markets. Relying on a wide array of methodological approaches – regression analyses of rating scores and various political and policy variables, content analyses of rating reports and country case studies – ‘Rating Politics’ shows that ratings systematically favor governments on the right of the political spectrum and endorse policies associated with the right. This practice not only generates harder financing conditions for left-leaning governments and countries with an attachment to more generous welfare policies, but it also produces systematically biased assessment of creditworthiness that underestimates risks associated with right-wing policies. Analysis of official communication by CRAs and interview evidence confirm that these outcomes are motivated by a mutually-reinforcing combination of organizational incentives and ideological convictions.

Zsófia Barta is a political economist and an associate professor in the Department of Political Science at the University at Albany SUNY . Her research and teaching interests are in comparative and international political economy and public policy. Dr. Barta's main research area is the politics of public debt, covering diverse aspects of public finances from societal conflicts surrounding austerity to the influence of the markets for government debt on policy choice.

Alison Johnston, Associate Professor of Political Science and Public Policy at Oregon State University is a political economist and her research interests include the comparative politics of the welfare state, general strikes, comparative capitalism, EU politics and European integration, and the domestic causes of international financial and debt crises. She is embarking on two new projects on the political economy of housing bubbles and household debt, and the partisan and policy determinants of (sovereign debt) credit ratings for developed economies. She's also a co-editor of the Review of International Political Economy.