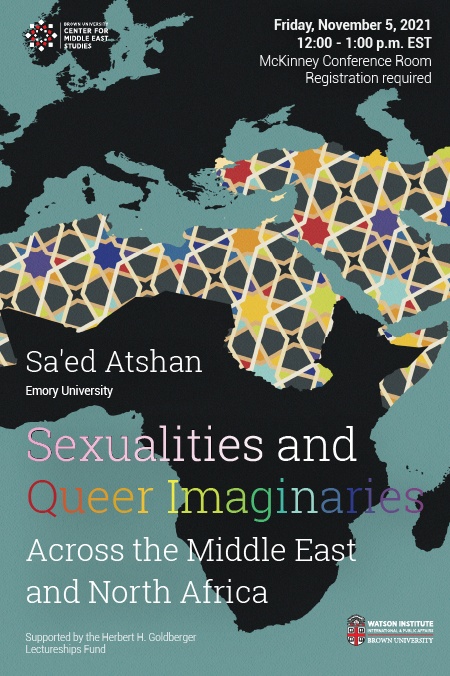 Over the past 15 years, there has been a mushrooming of Lesbian/Gay/Bisexual/Transgender/Queer (LGBTQ) social movements across the Middle East and North Africa (MENA). This talk will explore the rise of these movements and their region-wide networks, demonstrating how queer imaginaries are helping to re-make the idea of a MENA region.

Sa'ed Atshan is an (acting) associate professor of anthropology at Emory University. He is also an associate professor of peace and conflict studies at Swarthmore. Atshan previously served as a visiting assistant professor of anthropology and senior research scholar in Middle Eastern studies at the University of California, Berkeley, and as a postdoctoral fellow at Brown University's Watson Institute for International Studies. He earned a joint PhD in anthropology and Middle Eastern studies, an MA in social anthropology from Harvard University, and a Master in Public Policy (MPP) from the Harvard Kennedy School. As an anthropologist, Atshan's research is focused on a) contemporary Palestinian society and politics, b) global LGBTQ social movements, and c) Quaker Studies and Christian minorities in the Middle East. His forthcoming book, Paradoxes of Humanitarianism: The Social Life of Aid in the Palestinian Territories, is under contract with Stanford University Press in their Anthropology of Policy Series. He is also the author of Queer Palestine and the Empire of Critique (Stanford University Press, 2020), and is co-author of The Moral Triangle: Germans, Israelis, Palestinians (Duke University Press, 2020).