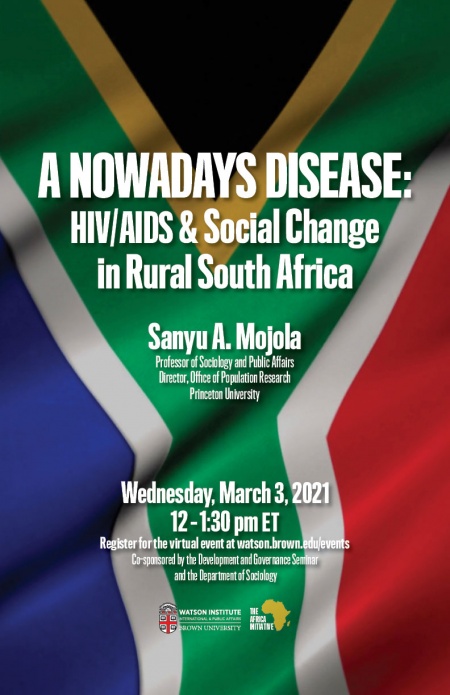 Why do some people adapt successfully to change while others do not? We examine this question in the context of a severe HIV/AIDS epidemic in South Africa, where adapting (or not) to social change has borne life and death consequences. Applying an age-period-cohort lens to the analysis of qualitative life history interviews among middle-aged and older adults, we consider the role of the life course and gendered sexuality in informing Africans’ strategies of action, or inaction, and in differentially driving and stalling change in each cohort in response to the HIV/AIDS epidemic. Our study illuminates the unique challenges of adapting to social change that result from dynamic interactions among aging, prevailing social structures, and a cohort’s socio-historical orientation to a new period.

Co-sponsored by the Department of Sociology

Sanyu A. Mojola is a Professor of Sociology and Public Affairs and the director of the Office of Population Research at Princeton University. She earned a first-class joint honors BA degree from Durham University, UK in 2000, and a PhD from the University of Chicago in 2008 where her dissertation won the Richard Saller Dissertation Prize given to the graduate whose dissertation is the most distinguished piece of scholarship across the Social Science Division of the University of Chicago in a given year. She was previously on the faculty of Sociology at the University of Michigan and the University of Colorado Boulder where she was a Gamm Teaching Fellow and was chosen as Faculty Mentor of the Year by sociology graduate students. She has also been a Hutchins Fellow at the Du Bois Research Institute in the Hutchins Center for African and African American Research at Harvard University.

Her research examines how societies produce health and illness. She is especially interested in how gender, race/ethnicity, aging and the life course and socio-economic status shape health outcomes. She has investigated how social processes and mechanisms within schools, communities, labor markets, cities and eco-systems can lead to health inequality. Her past and ongoing work primarily focus on the HIV/AIDS pandemic as it unfolds in various settings such as Kenya, the United States and South Africa. Her first book, Love, Money and HIV: Becoming a Modern African Woman in the Age of AIDS (University of California Press, 2014) won multiple awards including the 2016 Distinguished Scholarly Book Award (Best Book of the Year) from the American Sociological Association. In current work, her second book, under contract at University of California Press, examines the HIV epidemic among African Americans in Washington D.C and she is Principal Investigator of an NIH funded project called HIV after 40 in rural South Africa: Aging in the Context of an HIV/AIDS epidemic. Her team is investigating the causes and consequences of the HIV epidemic among middle-aged and older adults as they age in rural post-apartheid South Africa.

She serves on the editorial boards of the American Journal of Sociology, the Journal of Health and Social Behavior, Studies in Family Planning and a “Globalization in Everyday Life” Book Series at Stanford University Press. She has served on the Board of Directors of Boulder County AIDS Project and as chair of its programs committee, and also serves as a Council member of the Sex and Gender Section of the American Sociological Association.