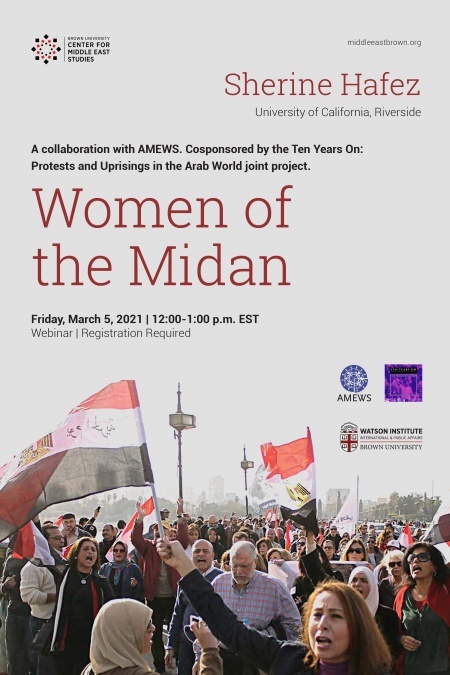 The ongoing struggles between contentious forces seeking to rewrite the future of millions of Arabs in the Middle East today are the subject of much debate and introspection. While revolutionary Arabs took part in protests that toppled governments and ended tyrannical regimes, their efforts were transmogrified into diverging outcomes that threaten to dismantle the region as we know it. Scholars and observers of Arab societies and politics have produced a vast amount of literature about the revolutions—what are they? Why did they emerge? What did they achieve or not achieve?—and many analyzed the impact on the region’s geopolitical contours, all important contributions that must be considered.

The bulk of this literature, however, addresses the events of the “Arab Spring” and its aftermath largely from a default male perspective and with emphasis on masculine-centric issues in the public sphere. Our knowledge of these important historical events has now been shaped by a plethora of documentation that normalizes male-centric views of the revolutions and takes for granted patriarchal forms of politics and social behavior with little or no input from women. Only a handful of scholarly publications have dealt with the events following the uprisings of 2011 from women’s perspectives. Considering that they were integral to the revolutions that took place in the Arab region, disproportionately representing women in the literature that will serve as a record of a major historical event for future specialists leads to a masculine-centric historiography of the Arab uprisings and the region as a whole. Limiting our sociocultural narrative to male-centric historicity ignores the experiences and responses to the political environment where both men and women live, their strategies and negotiations, and the measures they take to exercise their agency. Bringing Arab women to the center of the historical narrative, this book draws on accounts by Egyptian women who witnessed the realities of the revolutionary period that began January 25, 2011 and continue to this day.

Based on interviews collected over a five-year period with women from various backgrounds, classes and religious background, this current publication aims at redressing the imbalance of a male historical gaze that obscures women. It aims at producing an anthropological analysis of the 2011 revolution in Egypt that recenters women next to men as main actors during the events that toppled former president Mubarak, the elections that brought Muslim Brotherhood candidate Mohamed Morsi to government, and the events that surrounded the beginning of the current military regime of President el-Sisi. It does so without exceptionalizing women as a distinct “category” of analysis over men. Instead, it takes account of the struggles of the Egyptian people as they fought for a dream of “bread, freedom and social justice.” It is with this particular aim in mind that the following work is put to paper. To bring together a narrative that is inclusive of women in a male dominated scholarly epistemology.

A collaboration between Brown's Center for Middle East Studies and the Association for Middle East Women's Studies (AMEWS).
Cosponsored by the joint project “Ten Years On: Mass Protests and Uprisings in the Arab World”.

The Women of the Midan foregrounds the female body as a site for the events that shaped the revolutions in the Arab world from 2011 to this day and illuminates how marked/gendered bodies intervene within exclusive spaces to reassemble the complex weave of public space, state and government control, masculine politics, religious ideology, and cultural and social norms. These forces in turn constitute the body, shaping individuals, their sense of self, their subjectivities, and their political dispositions. This book captures the mutually productive, fluid processes that characterize the body and the forces that act upon it to understand how gendered human subjectivity is shaped in a revolutionary context. It sheds light on the individual's relationship to the state in the Arab world today and how practices of citizenship evolve in the region.

Sherine Hafez is professor and department chair of Gender and Sexuality Studies at University of California Riverside. She is the co-editor of the Journal of Middle East Women’s Studies (JMEWS) and served as president of the Association of Middle East Anthropologists (AMEA). Hafez’s research focuses on Islamic movements and gender studies in Arab and Middle Eastern cultures. Her new book, Women of the Midan: The Untold Stories of Egypt’s Revolutionaries (Indiana University Press 2019), discusses Egypt’s revolutionary women and gendered corporeal resistance in the Middle East.

Hafez is the author of The Terms of Empowerment: Islamic Women Activists in Egypt (2003), which questions the applicability of western liberal conceptions of empowerment to Islamic women's activism. Her second book, An Islam of Her Own: Reconsidering Religion And Secularism In Women's Islamic Movements (New York University Press 2011), challenges binary representations of women's subjectivities in Islamic movements by relating the interplay between the complex debates of modernity and postcoloniality to the particular historicity of Islam and secularism. She co-edited Anthropology of the Middle East and North Africa: Into the New Millennium (Indiana University Press 2013). Her articles have appeared in American Ethnologist; Signs: Journal of Women in Culture and Society; Feminist Review; Journal of Middle East Women’s Studies; and Journal of North African Studies. Hafez lectures on gender studies in the Middle East and Muslim-majority countries, Islamic movements, women’s Islamic activism and in the uprisings in the Arab World.