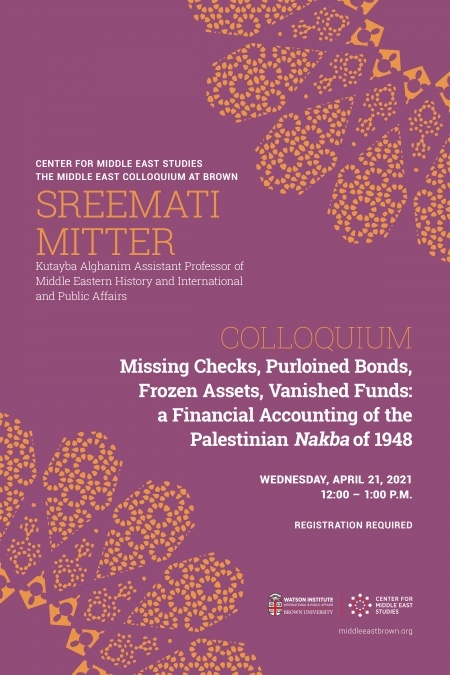 Studies of the violent transition in 1948 from Mandate Palestine to Israel have tended to focus on people and lands. Less has been said about the willful expropriation and misallocation of financial property belonging to the Palestinians who lived through the transition. This talk attempts to rectify that silence. Placing at its core the stories of ordinary people, it explores how they were robbed, during and after the creation of the state of Israel, of their bank accounts, bonds, checks, stocks, pensions, life insurance policies, savings certificates, and safety deposit boxes. This talk has a few related aims: first, it estimates the amounts and types of assets involved. Next, it describes the presumptively legal bureaucratic and diplomatic mechanisms through which the dispossession occurred. It goes on to elaborate how international banks and other financial institutions, as well as the Israeli, British and Jordanian governments, came to actively participate in this dispossession. Finally and most importantly, it recounts how the Palestinians fought to regain their financial property for years as best they could, using the law as their weapon, despite having no state of their own to support their claims. The ultimate aim of this talk is to underline how the absence of sovereignty impacts the economic lives of ordinary people, and robs them not just of their financial property, but of their very means of building their present, and their future.

Sreemati Mitter is the Kutayba Alghanim Assistant Professor of Middle Eastern History and International and Public Affairs at Brown University. She is also a research fellow at the Institute for Advanced Study in Toulouse, France. Her work examines the economic dimensions of statelessness. She is completing her first book, A History of Money in Palestine: From the 1900s to the Present. She received her Ph.D. and master’s in history from Harvard University, a master's in public policy from Harvard’s Kennedy School, and a B.A. in economics from Middlebury College. She previously worked for the Palestine Investment Fund in Ramallah, Palestinian Territories and at Credit Suisse in New York, for the Energy and Project Finance Group of its Investment Banking Division.