From the Streets to the Newsroom: Reporting on Race 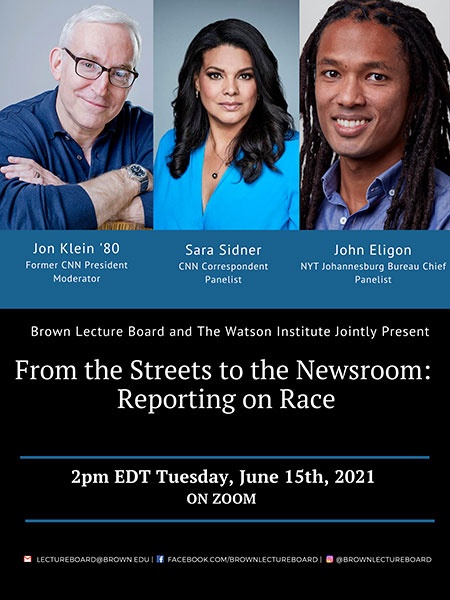 The Brown Lecture Board and the Watson Institute present a conversation on media and race with Sara Sidner and John Eligon, moderated by Jon Klein '80.

Attendees will have the opportunity to ask questions in the latter half of the event.

If you have any concerns regarding the accessibility of the event, or need any special accommodations, please contact lectureboard@brown.edu.

John Eligon is a national correspondent covering race, based in Kansas City. His work documents the nuances of America’s struggle with race issues, from the protest movement over police violence to the changing face of the nation’s cities and suburbs.

His work has taken him to South Africa to cover the death of Nelson Mandela and Turin to cover the Winter Olympics. As a Metro reporter, he broke the story of a bail bonds scheme that left poor defendants unable to gain their freedom. He has authored a narrative of the life of a young black man in one of St. Louis’s most violent neighborhoods, and a series that followed a Detroit neighborhood over the course of a year as it worked to lift itself out of bankruptcy. He also helped to shepherd the Times’s coverage of the police shooting of Michael Brown in Ferguson, Mo.

Born on the island of Trinidad and Tobago, Mr. Eligon moved to the United States as a young boy. He took to journalism in middle school because he loved sports and was excited by the idea of covering them. He graduated from Northwestern University with degrees in journalism and German. After covering sports for a year at The Detroit Free Press, he was hired by The Times, where he covered sports for two years before moving into news.

Sidner moved to Los Angeles in 2014, after being posted in Jerusalem, Abu Dhabi, and New Delhi, India.

Recently Sidner led the network's coverage in Minneapolis of the protests following the death of George Floyd and the trial of Derek Chauvin.

Sidner also extensively covered the protests in Ferguson, Missouri after an unarmed black teenager was shot and killed by a white police officer. She was there for weeks while a grand jury looked at evidence and ultimately decided not to indict the officer. Their decision sparked two nights of violence in Ferguson but it also led to nationwide protests and a national conversation about race and policing in America, as well as a state commission and Presidential task force on policing.

As an international correspondent, Sidner reported on a wide range of subjects, from terrorism to business to social and cultural issues. She has reported from a multitude of countries, including Libya, Egypt, Pakistan, Afghanistan, Nepal, Sri Lanka, Thailand, Cambodia, Indonesia, and Taiwan.

In the Middle East, Sidner was part of the team that won a Peabody award for CNN's coverage of the Arab Spring. Her work in Libya reporting in the midst of rebel fighters during the fall of Tripoli has been recognized all over the world. In 2011 Sidner shared the Achievement of the Year Award from SKY WFTV Women in Film & Television in the United Kingdom for her war coverage in Libya.

While in India, Sidner headed the coverage of South Asia from the New Delhi bureau. One of her first major international stories unfolded when terrorists attacked several places in Mumbai, including the famed Taj Mahal Palace and Tower Hotel, on November 26, 2008. Sidner was live throughout the 2008 siege that lasted 60 hours and took more than 170 lives. Her stories from South Asia also included a documentary on the 25 year civil war in Sri Lanka, several stints reporting in war-torn Afghanistan, and live coverage of violent political eruptions in Thailand and Bangladesh. She also explored many stories about the social and economic developments in India, culminating in a series of stories for CNN International's award winning "Freedom Project." Sidner also traveled to Chile and Haiti to cover the aftermath of devastating earthquakes in those countries.

Sidner has collected two Asian Television Awards -- one for her 2011 report on the horrors faced by young Bangladeshis forced into begging and a second for the 2012 Freedom Project documentary 'Operation Hope', which chronicled the extraordinary journey, from suffering to recovery, of one of these children, a seven-year-old boy who was castrated and left for dead when he refused to beg.

In 2013, Sidner received two Alliance for Women in Media Gracie Awards; one for her coverage of India's unwanted girls where she explored the issue of female infanticide in India and a second for her breaking news coverage of the 2012 Gaza-Israel conflict from Gaza & Israel.

Prior to joining CNN, Sidner was an anchor and reporter at local television news stations in San Francisco, Dallas, Florida, and Missouri. She received multiple awards during this time, including a regional Emmy Award, an Edward R. Murrow Award, and several Telly Awards.

Over three decades as a producer, director, executive, and media disrupter, Jon Klein has won every major broadcast honor including multiple Emmys, Peabodies, and DuPont-Columbia awards. In the early 1990’s, Jon helped to usher in reality television with his acclaimed series, “Before Your Eyes,” unscripted CBS movies of the week featuring real people going through dramatic life crises. He later became executive vice president of CBS News, overseeing “60 Minutes” among other programming. In 1998 Jon launched The FeedRoom, a pioneering online video aggregator that became one of the largest streaming sites in the world. As President of CNN/US from 2004-2010, Jon led the network to its highest ratings ever and doubled profits, while introducing game-changing innovations like the CNN/YouTube debate, user-generated newsgathering, the “magic” touch-screen wall, and the integration of Twitter into newsgathering and on the air.

Jon is the founder and Co-Chairman of Tapp TV, a subscription-based online video content network, home to individual "channels" built around public personalities.