Understanding the Crisis in Afghanistan 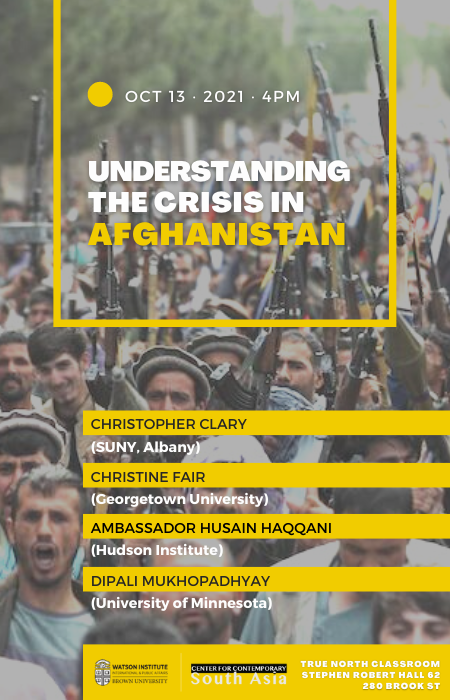 The Panel:
Christopher Clary is an Assistant Professor of Political Science at SUNY, Albany. His research focuses on the sources of cooperation in interstate rivalries, the causes and consequences of nuclear proliferation, U.S. defense policy, and the politics of South Asia.

Christine Fair is a Professor in the Peace and Security Studies Program within Georgetown University's Edmund A. Walsh School of Foreign Service. She previously served as a senior political scientist with the RAND Corporation, a political officer with the United Nations Assistance Mission to Afghanistan in Kabul, and a senior research associate at USIP's Center for Conflict Analysis and Prevention.

Husain Haqqani is a senior fellow and director for South and Central Asia at Hudson Institute. He served as Pakistan’s ambassador to the United States from 2008 to 2011 and is widely credited with managing a difficult partnership during a critical phase in the global war on terrorism.

Dipali Mukhopadhyay is an associate professor in the global policy area at the Humphrey School of Public Affairs. Her research focuses on the relationships between political violence, state building, and governance during and after war. She is currently serving as senior expert on the Afghanistan peace process for the U.S. Institute of Peace.