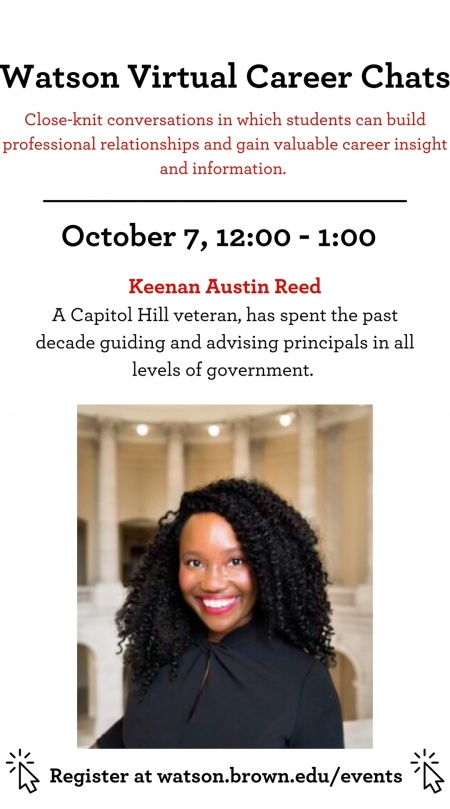 This event is for students only.

Join us October 7 as we welcome Keenan Austin Reed.  Keenan, a Capitol Hill veteran, has spent the past decade guiding and advising principals in all levels of government. In her role as Chief of Staff, she served as the Congressman's top policy and political advisor to the House Energy and Commerce Committee, where she crafted strategies to elevate the Congressman’s work as a national leader on climate change, environmental justice and rural broadband. She also led McEachin’s work as the Whip of the Congressional Black Caucus, building consensus around the Caucus’ priorities and advancing its agenda with House leadership.

In 2018, Keenan co-founded the Black Women’s Congressional Alliance (BWCA), a membership organization of more than 300 bipartisan and bicameral Black women Hill staffers. She has led dozens of professional development briefings, events and webinars to inform staffers about new career opportunities, provided a platform to elevate their profiles to the broader Capitol Hill community, and pushed growth in diverse hiring in the United States House and Senate. BWCA has been featured in the Majority Leaders Podcast, The Brown Girl’s Guide to Politics Podcast, VICE, Essence Magazine, and Washingtonian.

During the 2016 presidential election, Keenan served as Hillary for America’s Statewide Political Director in Florida, the largest political battleground state in the country. In that role, she was responsible for all federal, state, and local elected relationships within the state on behalf of the campaign and also managed the organization’s largest political staff. Previously, Keenan served as Chief of Staff to Councilmember David Grosso of the Council of the District of Columbia City. Prior to that, she served as Deputy Chief of Staff and Senior Advisor to Florida Congresswoman Frederica Wilson (FL-24), managing a portfolio including political outreach, stakeholder engagement, constituent services, and legislation. In 2010, she managed Congresswoman Wilson’s first election to Congress.

A proud Rattler, Keenan received her bachelor’s degree and MBA from Florida Agricultural and Mechanical University (FAMU). She is a member of Alpha Kappa Alpha Sorority, Incorporated.

The Watson Institute for International and Public Affairs strives to create a forum in which current students can engage and connect with prominent professionals. Through a Virtual Career Chat series, we aim to present students with an interactive and close-knit conversation in which they can build professional relationships and gain valuable career insight and information. Students are encouraged to ask questions regarding current jobs, professional guidance, career trajectories and best practices.