We Should Have Seen It Coming: From Reagan to Trump - A Front Row Seat to a Political Revolution 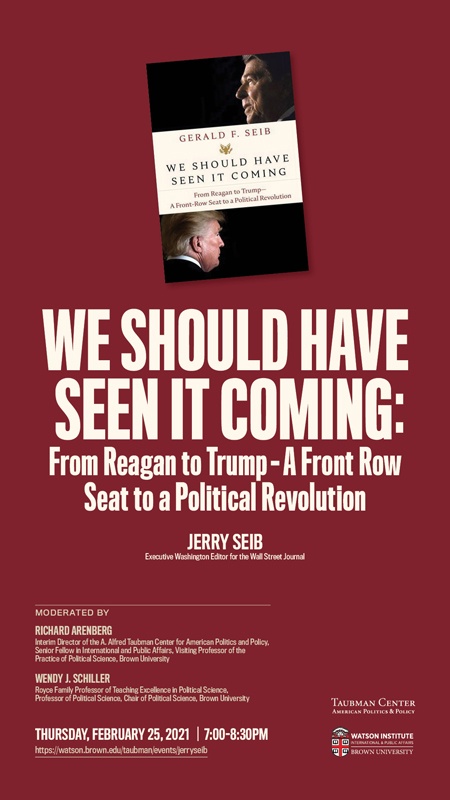 Gerald F. Seib is the executive Washington editor for The Wall Street Journal. He was previously the Washington bureau chief.

Seib appears regularly on networks such as CNBC, Fox Business Network, CNN and the BBC as a commentator on Washington affairs. He also writes a weekly column, “Capital Journal,” which brings an insightful, predictive and original understanding to politics, national affairs and foreign policy. He also has responsibility for The Wall Street Journal/NBC News polls.

Seib was part of the team from the Wall Street Journal that won the 2001 Pulitzer Prize in the “breaking news” category for its coverage of the Sept. 11 terrorist attacks. Past winners of this award include the Journal’s Vermont Royster, Walter Cronkite and Bob Woodward. In 2012 he won the Loeb lifetime achievement award for contributions to business and financial journalism.

Jerry Seib will join Brown Political Science Department Chair, Professor Wendy Schiller and Taubman Interim Director, Professor Richard Arenberg to discuss his recent book “We Should Have Seen It Coming: From Reagan to Trump - A Front Row Seat to a Political Revolution” and issues confronting the Biden Administration.