Advocacy, Technology, and Atrocity Prevention: A Conversation with Rebecca Hamilton 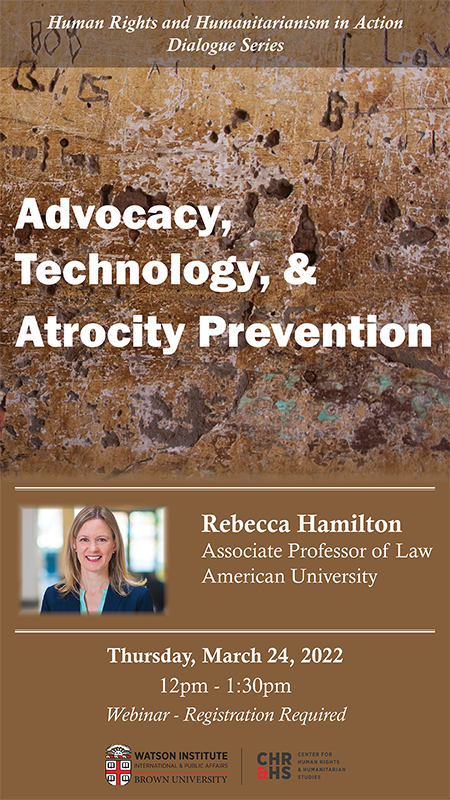 In this featured event, American University Associate Professor of Law Rebecca Hamilton will discuss her career as an international criminal lawyer, journalist and foreign correspondent, and distinguished legal scholar, as well as the role of advocacy and technology in preventing atrocities and advancing human rights. After graduating from law school, Hamilton served as a Special Assistant to the Prosecutor at the International Criminal Court before spending several years working as a journalist and foreign correspondent, including as Sudan correspondent for the Washington Post, where she covered protracted armed conflicts and the secession of South Sudan in 2011. Hamilton began her career in legal academia in 2013 and her scholarship, research, and teaching remains informed by these experiences and the struggle to prevent atrocity crimes and hold perpetrators accountable. Hamilton recently expanded her research to include the evolving role of technology in international criminal law, particularly for investigative and evidentiary matters. Hamilton will discuss her path to legal academia, what she hopes to accomplish through her legal research and scholarship, and how developments in technology can help or hinder international criminal law investigations and trials.

Rebecca Hamilton is an Associate Professor of Law at American University Washington College of Law (WCL), and has spent her career working on atrocity prevention. As a 2020 CFR International Affairs Fellow, she served in the Office of Special Operations/Low-Intensity Conflict in the Department of Defense. She is the author of Fighting for Darfur: Public Action and the Struggle to Stop Genocide, which analyzes citizen activism and the effort to stop mass atrocities. Her scholarship draws on her experience in the prosecution of genocide, war crimes, and crimes against humanity, as well as her work in conflict zones as a foreign correspondent.

Hamilton previously served as a lawyer in the prosecutorial division of the International Criminal Court. Prior to entering academia, Hamilton worked as a journalist for the Washington Post, and Reuters.  A Pulitzer Center grantee, she has been a fellow at New America and Open Society Foundations. She has also written for Foreign Affairs, The New Yorker, Foreign Policy, and The Atlantic. She has appeared on PBS Newshour, NPR, CBS, BBC, and other media outlets. A proud firstgen high school graduate, born in Aotearoa New Zealand, she is a member of the New York Bar, the American Society of International Law and the Council on Foreign Relations.