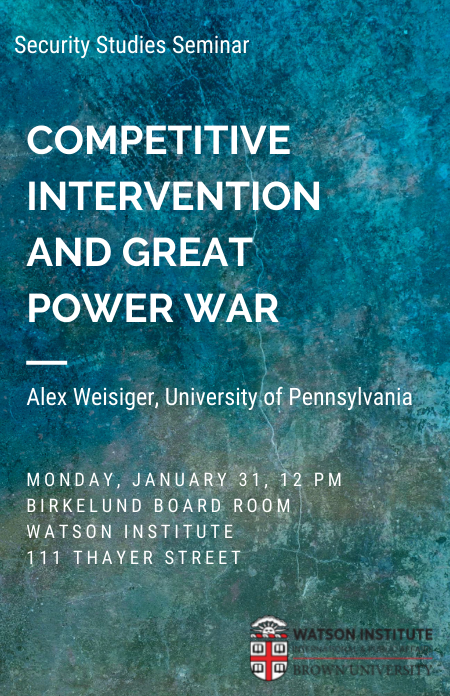 Discussions of possible great power war in the contemporary era have focused overwhelmingly on two scenarios: an inadvertent war arising out of accidental or unauthorized clashes, or an invasion of a minor power by an autocratic great power followed by intervention by a democratic great power. Wiesiger argues that, with the notable exception of a Chinese invasion of Taiwan, these scenarios are relatively unlikely to lead to war in the contemporary era, given nuclear deterrence, strong normative and nationalist barriers to major border changes through force, and the high costs of even a conventional war. By contrast, existing scholarship has neglected the possibility that great power war might arise when two great powers intervene on opposing sides in response to a regime crisis in a strategically important secondary state. The political alignment of strategically important states has an outside influence on great power security and interests, and is something that can quite plausibly be affected over an extended period by great power interventions. At the same time, a war that occurred primarily or exclusively within the territory of a secondary state could more plausibly be kept limited—undermining nuclear deterrence—and would not directly conflict with existing norms of territorial integrity. Weisiger demonstrates that the logic has been a significant source of great power crises and wars throughout history. During the post-WWI period,great power crises occurred more frequently in strategically salient states that had recently experienced irregular regime transitions. In addition, he demonstrates that succession crises arising from the deaths of a monarchs without clear legitimate heirs were an exogenous source of great power war during the pre-Napoleonic period (1495-1800). He concludes the article by discussing implications for the contemporary period, noting in particular the danger of great power war arising from regime instability in either North Korea or Pakistan.

Alex Weisiger (Ph.D. Columbia University, 2008), is an associate professor in the department of political science at the University of Pennsylvania. He studies international politics, focusing in particular on political decisions relating to the use of force. His book, Logics of War: Explanations for Limited and Unlimited Conflicts, explores the sources of variation in the destructiveness of wars between countries. In other work, he examines the phenomenon of regional systems of war, the relevance of systemic variables for the democratic peace, and the role of reputation in international politics. He has held fellowships at the Belfer Center for Science and International Affairs and the Olin Institute for Strategic Studies at Harvard University.

His teaching interests include the causes of war and peace, war termination and peacebuilding after conflict, international relations theory, and game theory.

A paper will be available one week in advance of the talk. Email watsonevents@brown.edu to request a copy of the paper.

The format of the seminar is a brief (5-minute) introduction by the author, some initial comments by a lead discussant (5-10 minutes), and then open comments from attendees. All attendees are expected to read the paper ahead of time, as the author will not present their research.