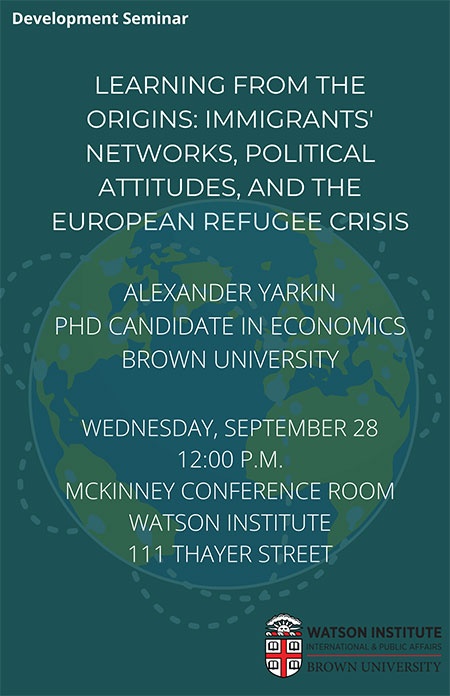 This paper documents the spread of anti-refugee sentiment, right-wing voting and other salient political opinions via international migration networks. It shows that attitudes, behaviors, and attention of 1st- and 2nd-generation immigrants co-move with their countries of origin. This co-movement is stronger for immigrants less socially integrated into their host societies. Three channels facilitate the transmission of attitudes: local co-ethnic diasporas, social media ties to the origins, and within-family cross-border connections. To advance causality, I leverage the variation in timing and intensity of the 2015 European Refugee Crisis. I show that political spillovers of anti-refugee sentiment activate during the periods of increased issue salience at the origins and contribute to the spread of support for right-wing populist parties. Augmenting social survey data with the data from Google Trends and Facebook, I show that (i) elevated attention to events at the origin, and (ii) network homophily are the mechanisms behind these cross-border contagion effects. Additional evidence from the staggered passage of same-sex marriage laws across European countries reveals similar contagion effects.

Alexander Yarkin is an Economics Ph.D. Candidate at Brown University, Department of Economics. He is a recipient of the 2022-2023 Interdisciplinary Fellowship at the Population Studies and Training Center, and an affiliate at Watson Institute and S4 Institute at Brown.

His research focuses on political economy, development, population, and culture. He is especially interested in migration, diffusion of opinions and ideas, social networks, economics of identity, and historical political economy.