Is American Democracy in Crisis? 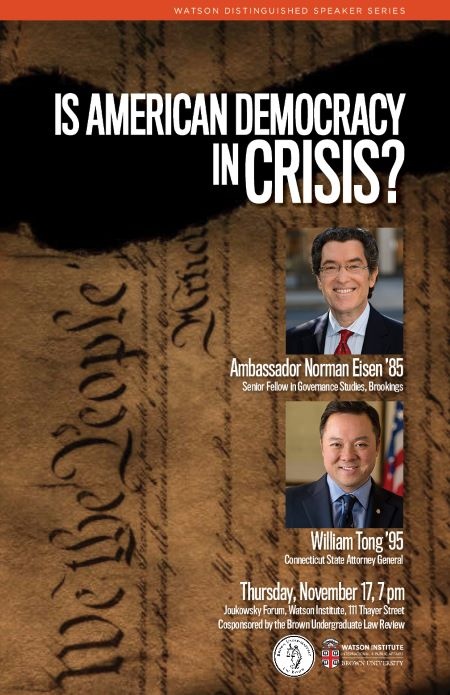 Join Ambassador Norman Eisen '85, and Connecticut Attorney General William Tong '95 for a discussion of the future of American democracy. In a time of increasing political polarization is American democracy itself in crisis? And if so what can be done?

​Ambassador Norman L. Eisen (ret.) is the Co-Founder and Executive Chair of the States United Democracy Center. An attorney and author who has served in a broad array of government roles, he was special counsel and special assistant to President Barack Obama for ethics and government reform from 2009-11. In that role, the press dubbed him “Mr. No” and the “Ethics Czar” for his tough anti-corruption approach. Following his service in the White House, he was our ambassador to the Czech Republic from 2011-14, where he was noted for his rule of law and other initiatives. His books about the Czech Republic are The Last Palace (Crown 2018) and Democracy’s Defenders (Brookings 2020). He served as special counsel to the House Judiciary Committee for the impeachment and trial of President Donald J Trump from 2019-20. His memoir of the impeachment is A Case for the American People (Crown 2020). Eisen is currently a senior fellow at a D.C. think tank and a legal analyst for a cable television network in addition to his duties at States United. His writing has frequently appeared in The New York Times, The Washington Post, Politico, USA Today, and CNN. He has been named to the Washingtonian’s Most Influential People, Politico 50, and the Forward 50. Eisen was the inspiration for the crusading attorney Deputy Kovacs in Wes Anderson’s movie, “The Grand Budapest Hotel.”

William Tong is the 25th Attorney General to serve the State of Connecticut. Assuming office in January 2019, Tong is the first Asian American elected at the statewide level in Connecticut. As the son of immigrants and small business owners, Tong knows first-hand the constant pressure on Connecticut families, squeezed by expensive healthcare and prescription drugs, ever-rising utility costs, the high cost of housing and education, and many other expenses.

Since taking office, Attorney General Tong has become a national leader on a range of issues. Mot prominently, AG Tong has taken a leading role in the fight against the opioid crisis; he has championed strong legal actions against opioid manufacturers, distributors, and other bad actors that have created and fueled this crisis – most notably the Sackler family and Purdue Pharma, makers of Oxycontin. Tong has also become a national leader on anti-trust enforcement, pursuing strong actions against large corporations in the pharmaceutical and technology sectors that have abused their positions to put profits ahead of consumers.

Prior to his service as Attorney General, William Tong worked as a litigator with private firms for 18 years before being elected as a State Representative in the Connecticut General Assembly – a seat he held for 12 years and in which he was the chairman of the Judiciary and Banking Committees. Attorney General Tong resides in Stamford with his wife, Elizabeth, and their three children (and way too many pets).

Ambassador Eisen and Attorney General Tong will be introduced by Chaelin Jung '23, the Editor-in-Chief of the Brown Undergraduate Law Review, and an Economics and IAPA concentrator.