Arie Krampf ─ The Strong Dollar Doctrine and the US Declining Monetary Power: An Outside-in Explanation to Clinton’s Economic Reforms 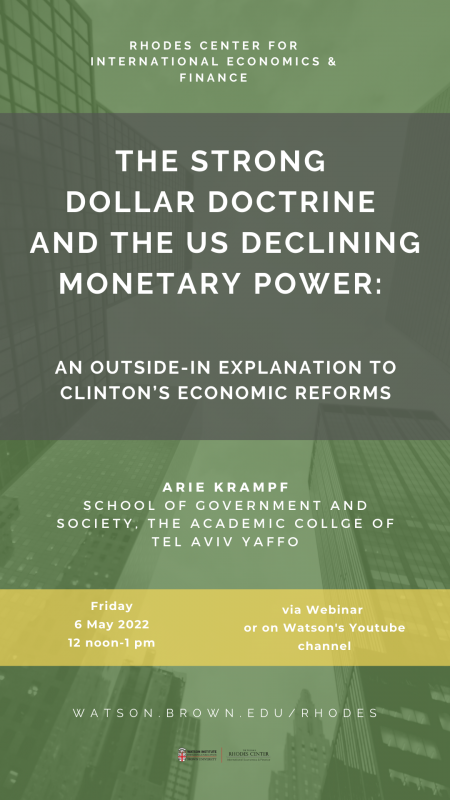 Two core tenets of US foreign economic policy have recently become deeply contested by policy makers on both the left and the right. These are (1) the strong dollar doctrine and (2) the rules-based economic world order. In both cases, the argument made is that continued adherence to these tenets no longer corresponds to the US national interest and should therefore be downgraded or event abandoned. If the strong dollar doctrine and the the rules based economic world order tenets did conform to the US national interest in the past, why did they become so deeply contested? Moreover, if they have become antagonistic to the US national interest, why have they endured? This paper traces the consolidation of the US strong dollar doctrine during the 1990s. It argues that the strong dollar doctrine was shaped amid a weakening of US monetary power and parallel strengthening of European monetary power. The doctrine restricted US domestic macroeconomic flexibility, however, and it therefore contributed to justifying president Clinton’s neoliberal reforms. The argument demonstrates the general claim that despite its economic power and international role of the dollar, the US faced a tension between its domestic and external economic interests like most open economies. According to this view, the Clinton reforms should be understood as a victory of the “internationalists” among the US policymaking circles, who prioritized external over domestic economic considerations. The historical analysis shed lights on the recent voices, from the left and right of the political spectrum, to abandoned the US strong dollar doctrine.

Arie Krampf is an associate professor at the School of Government and Society at the Academic College of Tel Aviv Yaffo. Currently, he is a Rohr Visiting Professor at the Department of Government and the Center of Jewish Studies at Harvard University. Arie is the head of the Forum of Money, Banking and Credit, of the Israeli Association for Economic History and he coordinates the Growth Models in the Global South Network that he founded. His recent book is The Israeli Path to Neoliberalism: The State, Continuity and Change (Routledge 2018).