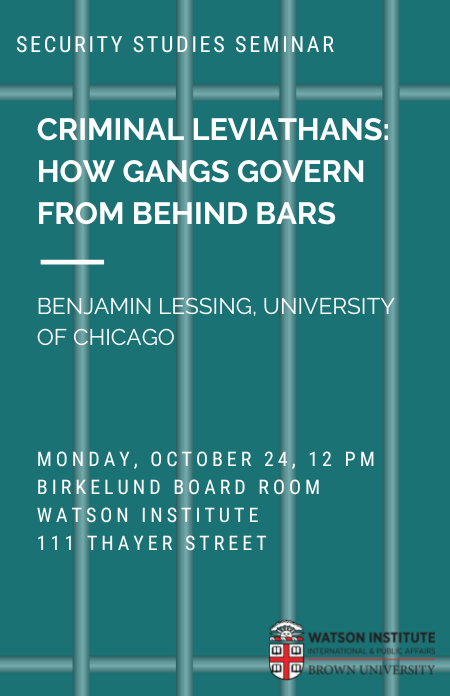 Benjamin Lessing, associate professor of political science at the University of Chicago, studies "criminal conflict"—organized violence involving armed groups that do not seek formal state power, such as drug cartels, prison gangs, and paramilitaries. His first book, Making Peace In Drug Wars: Crackdowns and Cartels in Latin America (Cambridge University Press, Studies in Comparative Politics Series, 2017), examines armed conflict between drug trafficking organizations and the state in Colombia, Mexico and Brazil. Choice named it one of its Outstanding Academic Titles for 2018, and it was reviewed in Latin American Politics and Society, Foreign Affairs, and Journal of Peace Studies.

His second book project, tentatively titled Criminal Leviathans: How Gangs Govern, Organize Crime, and Challenge the State from Behind Bars, explores the counterproductive effects of mass-incarceration policies, fostering the growth of powerful armed criminal groups at the core of the state's coercive apparatus.

The format of the seminar is a brief (5-minute) introduction by the author, some initial comments by a lead discussant (5-10 minutes), and then open comments from attendees (remainder of time). All attendees are expected to read the paper ahead of time, as the author will not present their research. This is a working session. Email watsonevents@brown.edu to request a copy of the paper.