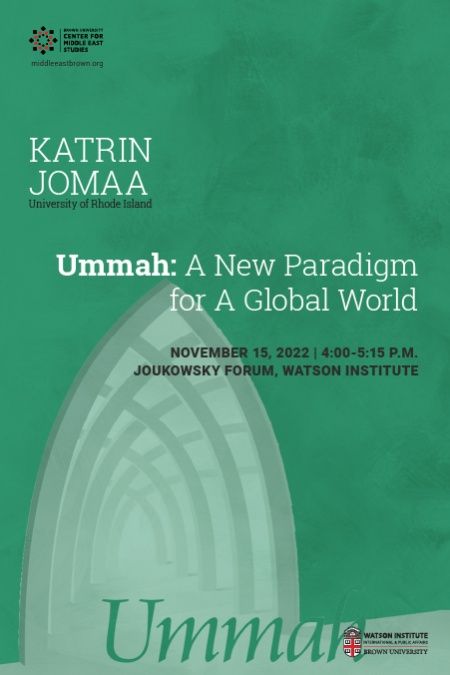 About Ummah: A New Paradigm for a Global World

How can we live together without alienation, avoidance, and fear? How can we complement one another such that each of us can uniquely contribute to the making of our societies? To address these and other questions, Katrin A. Jomaa examines the moral, political, and spiritual understanding of the Qur’anic term ""ummah"", which is commonly used to refer to the worldwide Muslim community but is employed more broadly in the Qur’an itself. Drawing on theology, history, philosophy, and political science, Jomaa argues that ummah, while often defined as a group of people united by ethnicity or religion, is, in its ideal sense, a community that demands active commitment and a conscious and continuous dedication to the highest moral ideals of that community rather than mere affiliation with a particular set of religious doctrines and practices. Jomaa begins by chronologically and thematically analyzing the word “ummah” in the Qur’an, a comprehensive study currently missing from Islamic scholarship, in order to propose a novel understanding of the term that connects all its different meanings. She then compares this new definition to the Aristotelean polis, which highlights the political features of ummah, thereby situating it within contemporary discourses on liberal politics and community and creating the space for an alternative sociopolitical order to the nation-state, both as a local unit and a global system.

Dr. Katrin Jomaa's interdisciplinary research interests encompass classical and modern political philosophy, as well as Islamic thought and Qur’anic exegesis, specially focusing on the relationship between religion and politics in the Middle East. Her research method employs analysis of Islamic primary sources to explore key concepts which could be utilized in constructing modern Islamic political theory. In 2013, Dr. Jomaa joined the University of Rhode Island as an Assistant Professor with a joint appointment in the Departments of Political Science and Philosophy. Besides her interest in the field of humanities, Dr. Jomaa has a dual passion for science and technology. She has a bachelor's degree in Mechanical Engineering from the American University in Cairo and a Master's degree in Applied Materials Science from the University of North Carolina-Chapel Hill. Her scientific background has informed her study of religion and politics as she employs structural analysis to the understanding of religious texts and political events.