Caitlin Dickerson — Life on the Move: The Global Refugee Crisis 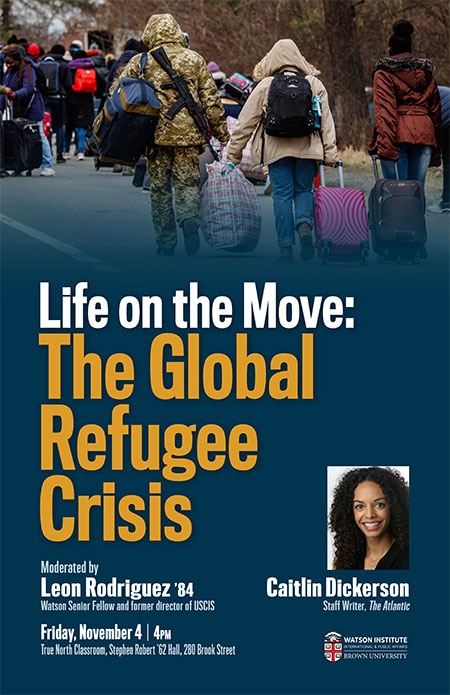 More than 80 million people have been forced from their homes worldwide by conflicts, climate change, persecution or destitution—a number that grows every day. From Warsaw, Poland, which has accepted more Ukrainian refugees fleeing war than any city in the world, to dangerous camps in Northern Mexico where asylum seekers wait to enter the United States, Dickerson’s on-the-ground reporting highlights the vulnerability and complexity of life on the move, which often exacerbates pre-existing inequality. As she wrote for The Atlantic, “Being forced from one’s home causes irrevocable harm to anyone who experiences it… Some find stability—and, if buffeted by the right passport, family connections, or luck, can even find greater prosperity. But that is no replacement for what they have lost. Far more displaced people, though, struggle to establish themselves in a new place, or find that they are unwelcome, so they have to keep moving in search of a new home."

From Ukraine to Romania to Guatemala, Caitlin Dickerson has spent years covering people forced to live on the move for some of the nation’s foremost news outlets. She dispels common myths about the forcibly displaced, and breaks down the seemingly complex forces that influence their life trajectories—from policy to rhetoric and public sentiment.

The Atlantic staff writer has broken stories that have led policies to be reversed and lives to change. Previously, Dickerson won Peabody and Edward R. Murrow awards for her investigative reporting for NPR. As a reporter for The New York Times, she wrote frequent front page stories revealing government policies and practices that put vulnerable communities at further risk.