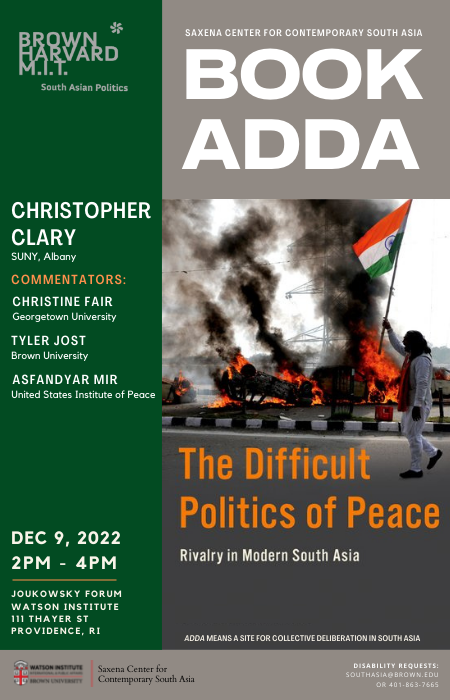 Join for a discussion on Christopher Clary's new book "The Difficult Politics of Peace" with Christine Fair, Tyler Jost and Asfandyar Mir.

About the book:
Since their mutual independence in 1947, India and Pakistan have been engaged in a fierce rivalry. Even today, both rivals continue to devote enormous resources to their military competition even as they face other pressing challenges at home and abroad. Why and when do rival states pursue conflict or cooperation? In The Difficult Politics of Peace, Christopher Clary provides a systematic examination of war-making and peace-building in the India-Pakistan rivalry from 1947 to the present. Drawing upon new evidence from recently declassified documents and policymaker interviews, the book traces India and Pakistan's complex history to explain patterns in their enduring rivalry and argues that domestic politics have often overshadowed strategic interests. It shows that Pakistan's dangerous civil-military relationship and India's fractious coalition politics have frequently stymied leaders that attempted to build a more durable peace between the South Asian rivals. In so doing, Clary offers a revised understanding of the causes of war and peace that brings difficult and sometimes dangerous domestic politics to the forefront.

Christopher Clary is an Assistant Professor of Political Science. His research focuses on the sources of cooperation in interstate rivalries, the causes and consequences of nuclear proliferation, U.S. defense policy, and the politics of South Asia. Previously, he was a postdoctoral fellow at the Watson Institute for International and Public Affairs at Brown University (2015-2016), a predoctoral fellow at the Belfer Center for Science and International Affairs at Harvard University (2014-2015), a Stanton Nuclear Security Predoctoral Fellow at the RAND Corporation (2013-2014), and a Council on Foreign Relations International Affairs Fellow in India (2009). Clary also served as country director for South Asian affairs in the Office of the Secretary of Defense (2006–2009), a research associate at the U.S. Naval Postgraduate School in Monterey, California (2003–2005), and a research assistant at the Henry L. Stimson Center in Washington, D.C. (2001–2003). He received his PhD in Political Science from MIT, an MA in National Security Affairs from the Naval Postgraduate School, and a BA in History and International Studies from Wichita State University.