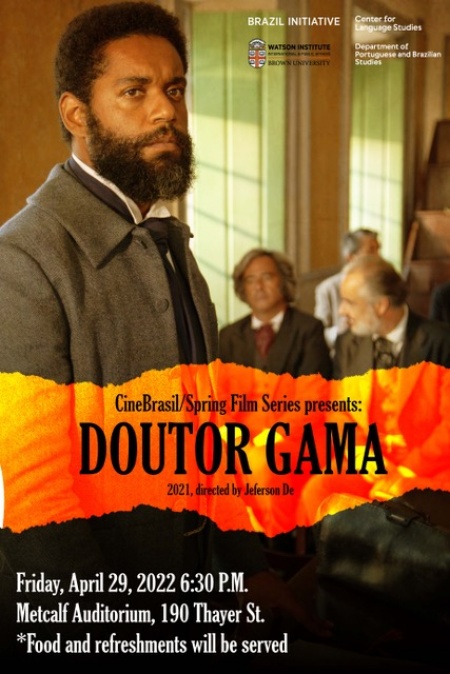 Food and refreshments will be served.

Doutor Gama, directed by Jeferson De, is based on the life of Luiz Gama, one of the most important characters in Brazilian history. Luiz Gama was an Afro-Brazilian man who used the law and the courts to free over 500 slaves. Born a free man, Gama was sold as a slave at the age of 10 as payment for his father's debts. Even as a slave, he learned to read and write, studied, and then gained his own freedom, becoming one of the most respected lawyers of his time. He was an abolitionist and a republican who inspired an entire nation.

Director Jeferson De studied cinema at the University of São Paulo (USP). His first feature film was the 2010 Bróder that was screened as part of the 6th Sundance Screenwriters Lab, the 60th Berlinale, as well as many other festivals worldwide, winning multiple prizes. He is a founder of the Dogma Feijoada, a project that works to promote Afro-Brazilian filmmakers on both sides of the lens. He also directed the short films: Distraída pra Morte (2001), Carolina (2003), and Narciso Rap (2005).