Crisis Seminar on the Invasion of Ukraine 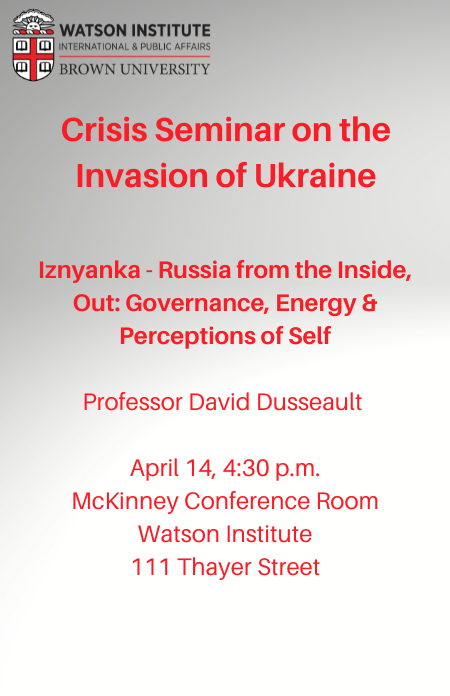 Join the Watson Institute for an informal discussion of Russia's invasion of Ukraine. Watson visiting professor Lyle Goldstein will lead the group discussion, open to all students, faculty, and staff. This week David Dusseault will start the conversation with a discussion of  "Iznyanka - Russia from the Inside, Out: Governance, Energy & Perceptions of Self."

Over a career that has spanned thirty years, David has cultivated an unique, intimate knowledge of the political, economic and social structures which define the workings of the contemporary Russian state.

David’s research on Russia further evolved at the Department of Political Science (1995-1999), and Aleksanteri Institute (2004-2011) University of Helsinki, Finland where he was named Acting Professor of Russian Energy Policy in 2009.

From 2011-2015, David was employed as Senior Market Analyst for the Finnish Natural Gas Distribution Company Gasum OY where he had a hand in retooling the company’s strategic vision to match up with evolving European energy market reforms.

His most recent posting saw him as Professor of International Relations at the Faculty of Social Sceinces and Humanities at Tyumen State University, Tyumen, Russia (2018-2022).