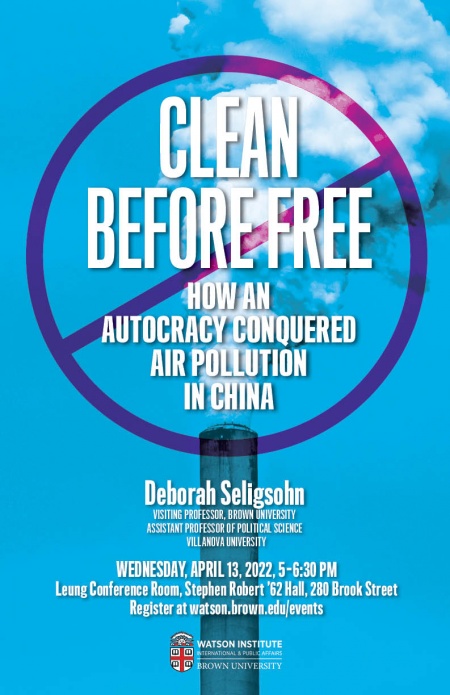 Register here to attend this discussion .  Pizza will be served.

Join us for a discussion of Deborah Seligsohn's book in progress Clean Before Free: How an Autocracy Conquered Air Pollution in China. There has been an assumption in political science that public goods arise because of democratic pressure. And yet, we have seen substantial improvements in air quality in China over the past fifteen years. These improvements have occurred in an autocracy, where if anything the sphere for citizen participation has diminished over the same period. This book attempts to answer the question of how the Chinese government achieved these results. It looks in particular at how the Chinese regulatory state focused on large industrial polluters, and how it was able to use the self-interest of the polluters themselves to promote pollution abatement.

Deborah Seligsohn is an Assistant Professor of Political Science at Villanova University, currently spending the semester as a Visiting Professor at Brown University. Her research focuses on Chinese politics, US-China relations and energy and environmental politics in China and India. Prior to receiving her PhD in Political Science and International Affairs from the University of California San Diego in 2018 she worked in both the NGO and government sectors on energy, climate and the environment. From 2007 to 2012 she was based in Beijing as the Principal Advisor to the World Resources Institute’s China Energy and Climate Program. She also had over 20 years’ experience in the United States Department of State, working on energy and environment issues in China, India, Nepal and New Zealand. Her most recent position was as Environment, Science, Technology and Health Counselor in Beijing, 2003-2007. Her work has appeared in political science journals and through the World Resources Institute, as well as in the New York Times, the Washington Post, the South China Morning Post, the Financial Times, and other publications.