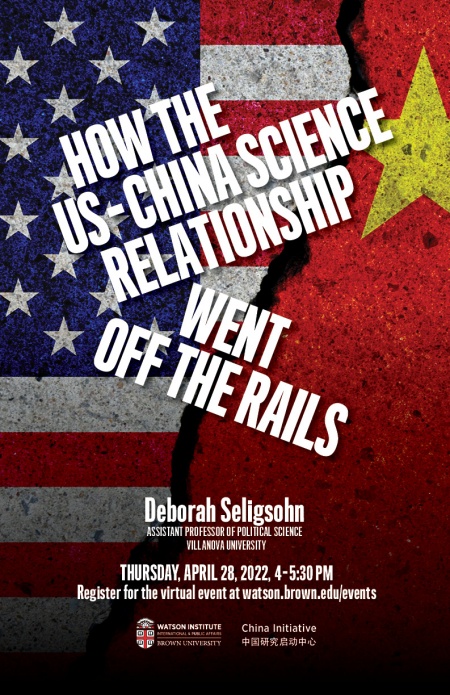 Scientific cooperation between the US and China has been a cornerstone of the bilateral relationship for more than 40 years. In fact, the bilateral Science and Technology Cooperation Agreement was the first bilateral treaty signed under normalization in 1979. For most of this period China had less advanced science and therefore more opportunity to learn than the US. Today, the two countries are much more equal, and thus the US has just as much it could potentially learn from Chinese science as the reverse. And yet, at this moment of parity the US has pulled away. This talk explores the puzzle as to why the US is withdrawing from a relationship precisely at the moment when it has the greatest opportunity to benefit. Using my experience as the US Science Counselor in Beijing as well as my academic research, I explore how the original construction of the relationship now threatens its future.

Deborah Seligsohn is an Assistant Professor of Political Science at Villanova University, currently spending the semester as a Visiting Professor at Brown University. Her research focuses on Chinese politics, US-China relations and energy and environmental politics in China and India. Prior to receiving her PhD in Political Science and International Affairs from the University of California San Diego in 2018 she worked in both the NGO and government sectors on energy, climate and the environment. From 2007 to 2012 she was based in Beijing as the Principal Advisor to the World Resources Institute’s China Energy and Climate Program. She also had over 20 years’ experience in the United States Department of State, working on energy and environment issues in China, India, Nepal and New Zealand. Her most recent position was as Environment, Science, Technology and Health Counselor in Beijing, 2003-2007. Her work has appeared in political science journals and through the World Resources Institute, as well as in the New York Times, the Washington Post, the South China Morning Post, the Financial Times, and other publications.