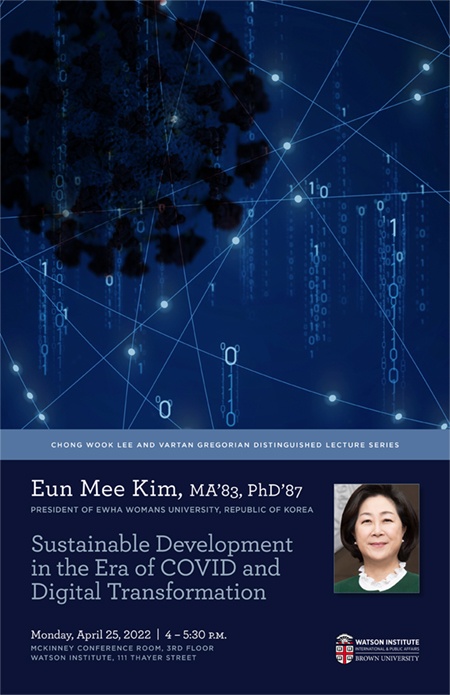 ​In this presentation, Eun Mee Kim will discuss how the Digital Transformation or the Fourth Industrial Revolution and COVID-19 have affected all of us in very fundamental ways. We have witnessed the fallout in developing countries, rising inequality, and exacerbation of the advances made by women in the last century. The UN's Sustainable Development Goals (SDGs, 2016-2030) for the whole world, and international development cooperation to help reduce the gap between the Global North and the Global South will be presented as alternative solutions in the era of digital transformation (Fourth Industrial Revolution) and pandemics.

Professor Eun Mee Kim is the 17th President of Ewha Womans University. She is Professor in the Graduate School of International Studies, Director of the Ewha Global Health Institute for Girls and Women, former Dean of the Graduate School, former Dean of the Graduate School of International Studies, and former Director of the Institute for Development and Human Security at Ewha Womans University. She was appointed by the UN Secretary General in December 2016 to serve as one of the fifteen Independent Group of Scientists to work on the Global Sustainable Development Report 2019, which was presented to the UN Secretary General and heads of member states at the UN General Assembly in September 2019. She served as President of the Korea Association of International Development and Cooperation (2011, 2012). She has served on the Committee for International Development Cooperation under the Prime Minister’s Office, the Policy Advisory Committee for the Ministry of Foreign Affairs, and the Ministry of Gender Equality and Family. In 2012, she received the Service Merit Medal from the Republic of Korea for her contributions to the Fourth High-Level Forum on Aid Effectiveness in Busan. In 2013, she received the first research grant to a university in South Korea from the Bill & Melinda Gates Foundation on her research, “Advocacy for Korean Engagement in Global Health and Development.” In 2016, and again in 2019, she received a research grant from the Bill & Melinda Gates Foundation for “Korea Global Health Strategy.” She has been appointed as the Vice-Chairperson of the Korean National Commission for UNESCO in May 2021. She received the Chang-Lin Tien Distinguished Leadership Award from the Asia Foundation in 2021.