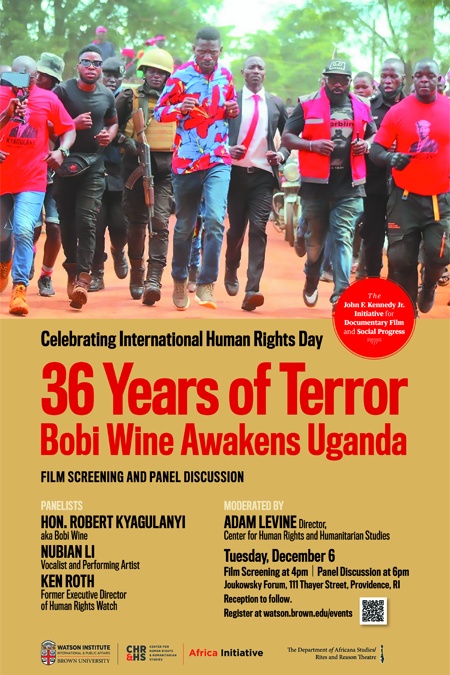 This observational documentary film follows Bobi Wine and his wife Barbie. Bobi rises from the ghetto slums of Kampala to one of the country’s most loved superstars. His musical talent lifts him and emboldens millions of previously voiceless people. Bobi uses his music for activism, then becomes an Independent Member of Parliament to stand to defend the rights of his people, the ghetto people. Bobi’s wife, Barbie, by standing with him, plunges her own life into uncertainty. The film is an examination of the disturbing misuse of the legal and parliamentary systems, two supposed pillars of democracy. The country’s institutions are controlled by the State to ensure President Museveni, an autocratic strongman, who has held power since 1986, continues to rule Uganda. Bobi and Barbie must risk everything, their lives and their futures to challenge him. The state is determined to silence, not only them, but anyone who supports their cause. This is not just a story for Uganda, it is a narrative for all those who struggle under dictatorial regimes. Those who oppose them quickly discover that Western democracies have interests that do not extend to holding autocrats to account. This story has never been so relevant.

Cosponsored by the John F. Kennedy Jr. Initiative for Documentary Film and Social Progress, the Center for Human Rights and Humanitarian Studies, the Africa Initiative, and the Department of Africana Studies/Rites and Reason Theatre.