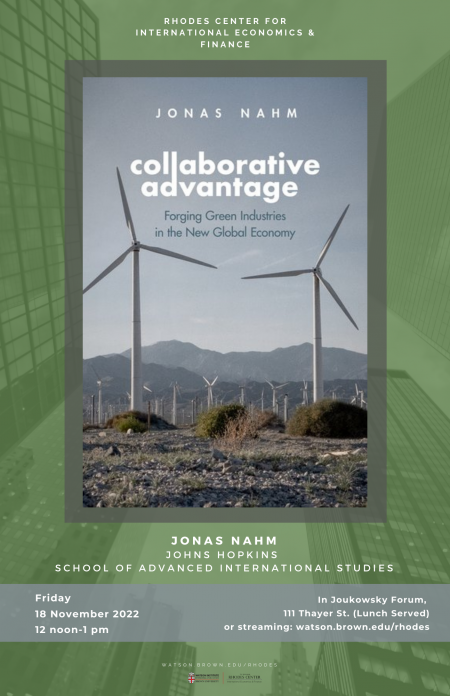 Jonas Nahm will join the Rhodes Center to discuss the development of wind and solar industries in China, Germany, and the United States as a window into the political economy of innovation and industrial development in highly globalized industries. Titled "Collaborative Advantage: Forging Green Industries in the New Global Economy" he argues that new possibilities for collaboration among firms in the global economy have reinforced national patterns of industrial specialization. In the decades before international economic integration made it easier for firms from around the world to work together on tasks ranging from production to innovation, differences in national capitalisms yielded equally distinct national industrial specializations for production, innovation, and competitiveness. Globalization has since challenged the primacy of nation states by moving beyond their territorial reach many of the activities that now make up the global economy. However, as shown in the book, globalization not only continues to be mediated by domestic institutions, it also causes persistent and consequential divergence of such institutions and national industrial specializations over time.

Jonas Nahm is an Assistant Professor of Energy, Resources, and Environment at the Johns Hopkins School of Advanced International Studies (SAIS) in Washington, DC.

His research interests focus on the intersection of economic and industrial policy, energy policy, and environmental politics. He studies the role of the state in processes of industrial restructuring that accompany policy responses to climate change and clean energy transitions more broadly. His work utilizes clean energy transitions in China, Germany, and the United States to engage two debates in comparative political economy: (1) the role of the state in shaping the international division of labor in highly globalized industries, and (2) sources of state capacity in interest group politics during periods of industrial restructuring.