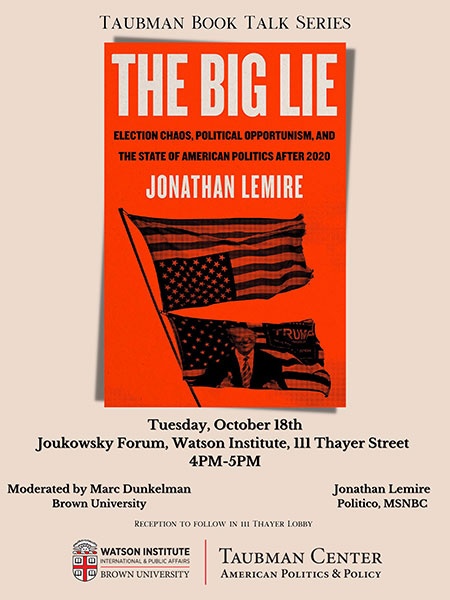 Jonathan Lemire will discuss midterm elections and his book, THE BIG LIE: Election Chaos, Political Opportunism, and the State of American Politics after 2020 on the US election in 2020. Jonathan Lemire uncovers that “The Big Lie,” as it’s been termed, isn’t just about the 2020 election. It's become a political philosophy that has only further divided the two parties.

Donald Trump first tried it out in 2016, at an August rally in Ohio. He said that perhaps he wouldn’t accept the election results in his race against Hillary Clinton, that the election was “rigged.” He didn’t have to challenge the result that year, but the stage was set. When he lost in 2020, he started the lie back up again and to devastating results: an insurrection at the Capitol in January 2021.

In the more than five tumultuous, paradigm-shifting years of Donald Trump’s presidency and beyond, his near-constant lying has become a fixture of political life. It is inextricably linked with how his party behaves, how the Democrats respond to it, and how he remains relevant, even after a decisive loss in 2020. Jonathan Lemire brings his connections, profile, and dogged reportorial instincts to bear in his first book that explores how this phenomenon shapes our politics.

Written with sharp political insight and detailed with dozens of interviews, The Big Lie is the first book to examine this unprecedented and tenuous moment in our nation’s politics.

Jonathan Lemire is an American journalist and political correspondent. He is currently the White House bureau chief of Politico and is the host of MSNBC's morning news show Way Too Early.