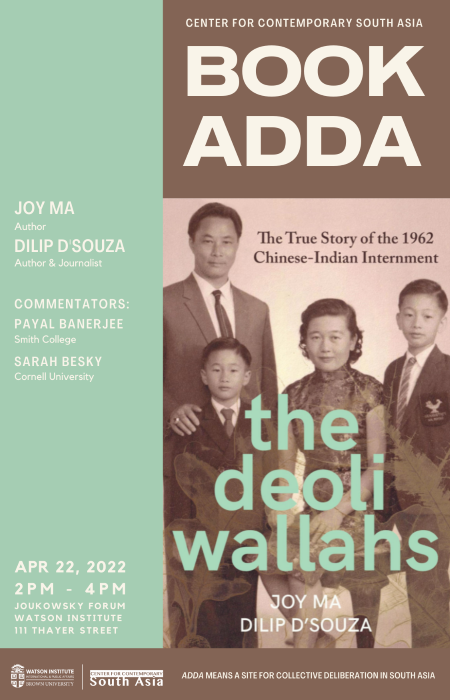 About the book:
The untold account of the internment of 3,000 Chinese-Indians after the 1962 Sino-Indian War.

Just after the Sino-Indian War of 1962, about 3,000 Chinese-Indians were sent to languish in a disused World War II POW camp in Deoli, Rajasthan, marking the beginning of a painful five-year-long internment without resolution. At a time of war with China, these ‘Chinese-looking’ people had fallen prey to government suspicion and paranoia which soon seeped into the public consciousness. This is a page of Indian history that comes wrapped in prejudice and fear, and is today largely forgotten. But over five decades on, survivors of the internment are finally starting to tell their stories.

As several Indian communities are once again faced with discrimination, The Deoliwallahs records these untold stories through extensive interviews with seven survivors of the Deoli internment. Through these accounts, the book recovers a crucial chapter in our history, also documenting for the first time how the Chinese came to be in India, how they made this country their home and became a significant community, until the war of 1962 brought on a terrible incarceration, displacement and tragedy.

Joy Ma grew up and was educated in India until she left for graduate school in the US. She enjoys travelling, meeting people and writing. Joy lives in the San Francisco Bay Area with her husband, two sons, her mother and Willie, the family dog. She was one of a handful of children born in the Deoli internment camp in Rajasthan.

Dilip D’Souza was educated in Pilani, Providence, Delhi, Rishi Valley, Bombay, Cambridge, Austin and places in between. Once a computer scientist, he now writes for his suppers: about political and social issues, travel, sports and mathematics. His writing has won him several awards, including the Statesman Rural Reporting Award, the Outlook–Picador India Non- fiction Prize and the Newsweek–Daily Beast South Asia Commentary Prize. He has published eight  books, The Deoliwallahs being the most recent. He lives in Bombay with his wife, children and Aziz the cat. He misses his Rhodesian Ridgeback, Shaka.