Legacy of the ‘Dark Side’: The Costs of Unlawful U.S. Detentions and Interrogations Post-9/11 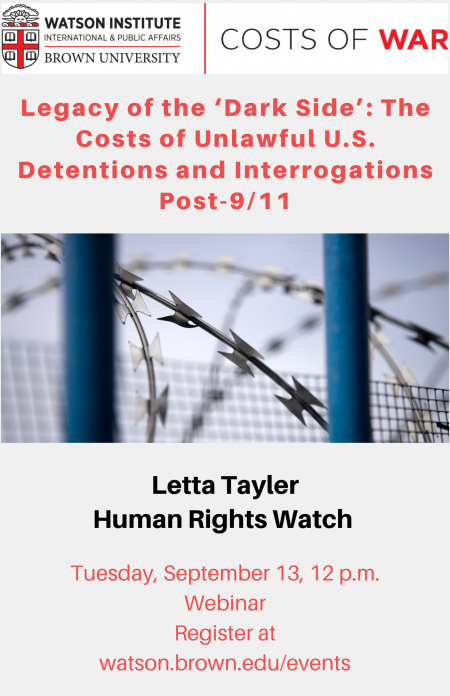 Over twenty years have passed since 9/11, yet the U.S. military is still unlawfully holding 36 foreign Muslim men at Guantanamo Bay, Cuba. The U.S. has also detained thousands of Muslims in other countries in its “War on Terror,” including in secretive CIA “black sites” where many were tortured. Since shifting away from capture, U.S. forces have killed thousands of civilians in airstrikes. In this one-hour webinar, Letta Tayler of Human Rights Watch will present findings and recommendations from a paper she co-authored for the Costs of War Project entitled, “Legacy of the ‘Dark Side’: The Costs of Unlawful U.S. Detentions and Interrogations Post-9/11.”

Letta Tayler is an Associate Director in the Crisis and Conflict Division at Human Rights Watch. She leads the division's work on terrorism and counterterrorism. Her focus includes the Islamic State and Al-Qaeda, counterterrorism policy at the United Nations, drone strikes and other targeted killings, and measures in countries around the world on foreign ISIS suspects and family members. Tayler has worked in more than three dozen countries as a human rights defender and in her previous capacity as a journalist. She has been a featured guest on The BBC, CNN, Fresh Air, Al Jazeera, and Democracy Now! As a foreign correspondent with Newsday, Tayler was one of the first Western reporters to detail prisoner abuse at Abu Ghraib and chronicled events including the US invasion of Iraq and the bombings of Tora Bora.

Nina Tannenwald is Senior Lecturer in the Department of Political Science. Her research focuses on the role of international institutions, norms and ideas in global security issues, efforts to control weapons of mass destruction, and human rights and the laws of war. Her book, The Nuclear Taboo: The United States and the Nonuse of Nuclear Weapons Since 1945 (Cambridge University Press, 2007), won the 2009 Lepgold Prize for best book in international relations.