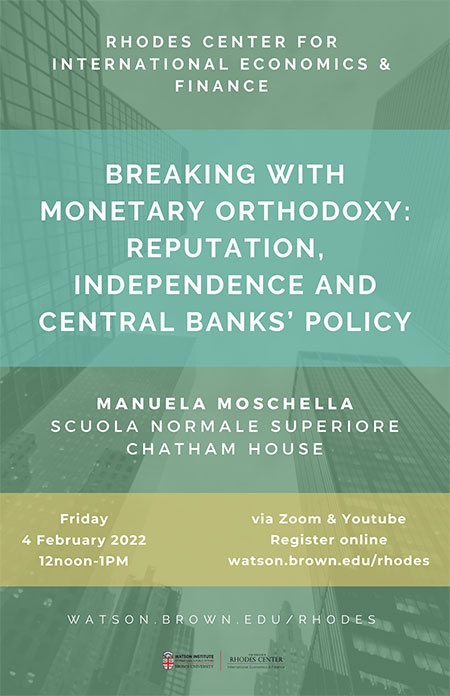 Register here to join the webinar or watch on Watson's Youtube channel.

During the past three decades, the notion that central bankers should be free from political interference to keep inflation low and stable has become an almost universally-accepted principle of macroeconomic doctrine. However, the deflationary forces unleashed by the 2008 global financial crisis and the 2020 COVID-19 crisis have led central banks to adopt policies that have significantly deviated from the dominant consensus. Why did central banks break with monetary orthodoxy? How did the transformation in central banking unfold? And, more generally, what these transformations tell us about the conditions that stabilize or bring about change in macroeconomic regimes, especially at a time where inflationary forces are back into the radar screen?

Manuela Moschella is Associate Professor of International Political Economy at the Scuola Normale Superiore and Associate Fellow at the Europe Programme at Chatham House. She is also an associate editor of the Routledge Studies in Globalisation Series. Her research focuses on the relationship between technocracy and politics, the role of institutions and economic ideas in economic policymaking, the politics of macroeconomic and financial regulatory choices, and the behavior of international organizations.

She is the editor (with Eleni Tsingou) of the book Great Expectations, Slow Transformations: Incremental change in post-crisis regulation (ECPR Press 2013), and author of the book author Governing Risk: The IMF and Global Financial Stability (Palgrave MacMillan 2010). In 2012, the latter has been awarded by the Italian Political Science Association as “the best book in political science” published by a member “under forty” in the period 2010-2012. Moschella is also the author of numerous per-reviewed articles published in journals like Public Administration, Government & Opposition, Journal of Common Market Studies, Journal of European Public Policy, New Political Economy, Review of International Political Economy, and West European Politics.