Matthew Teller - Nine Quarters of Jerusalem: A New Biography of the Old City 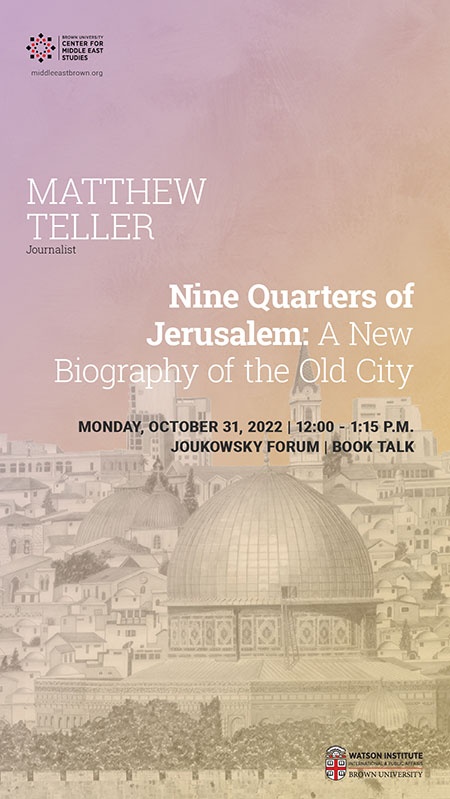 In Jerusalem, what you see and what is true are two different things. The Old City has never had “four quarters” as its maps proclaim. And beyond the crush and frenzy of its major religious sites, many of its quarters are little known to visitors, its people ignored and their stories untold. A new book, Nine Quarters of Jerusalem, lets the communities of the Old City speak for themselves. Ranging from the ancient past to the political present, it evokes the city’s depth and cultural diversity.

Matthew Teller’s highly original “biography” features the Old City’s Palestinian and Jewish communities, but also spotlights its Indian and African populations, its Greek and Armenian and Syriac cultures, its downtrodden Dom Gypsy families, and its Sufi mystics. It discusses the sources of Jerusalem’s holiness and the ideas—often startlingly secular—that have shaped lives within its walls. It is an evocation of place through the story, led by the voices of Jerusalemites.

Matthew Teller writes for the BBC, The Guardian, Times of London, Financial Times, and other global media. He has produced and presented documentaries for BBC Radio and has reported for the BBC’s From Our Own Correspondent program from around the Middle East and beyond. He is the author of several travel guides, including, The Rough Guide to Jordan. His previous book was, Quite Alone: Journalism from the Middle East 2008–2019.