Michael Glennon ─ The Role of NATO and the U.S. Congress in the Ukraine Crisis 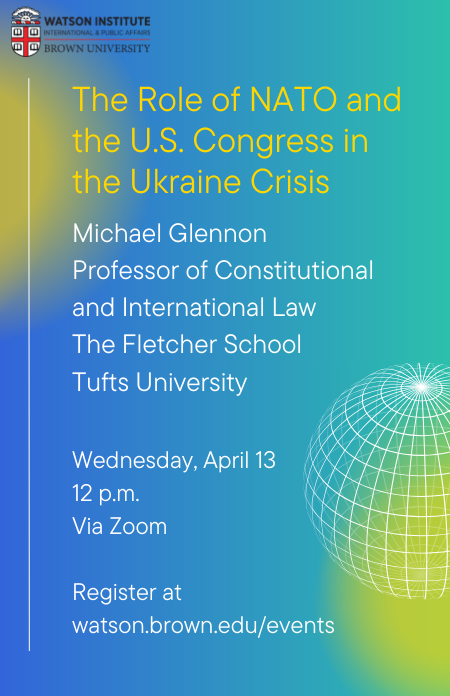 Register here. A Zoom meeting link will be sent to registrants on Wednesday morning.

Michael Glennon is a professor of constitutional law at the Fletcher School at Tufts University. He is a legal scholar with practical experience as counsel to the US Senate and the Senate Foreign Relations Committee. In that capacity he has worked on legislation on US foreign policy and national security, including war powers. He will reflect on the powers given to NATO under Article 5 of the treaty and the role Congress might play in the Ukraine crisis. He is a member of the American Law Institute and the Council on Foreign Relations and the author of numerous articles on constitutional and international law as well as several books, including Constitutional Diplomacy (Princeton, 1990) and National Security and Double Government (Oxford, 2016). His op-ed pieces and articles have appeared in the New York Times, Washington Post, Los Angeles Times, Financial Times, Frankfurt Allgemeine Zeitung, and Harper’s Magazine.

Moderated by J. Brian Atwood, Visiting Scholar in International and Public Affairs at the Watson Institute.