Nayanika Mathur — Writing the Anthropocene from the Indian Himalaya 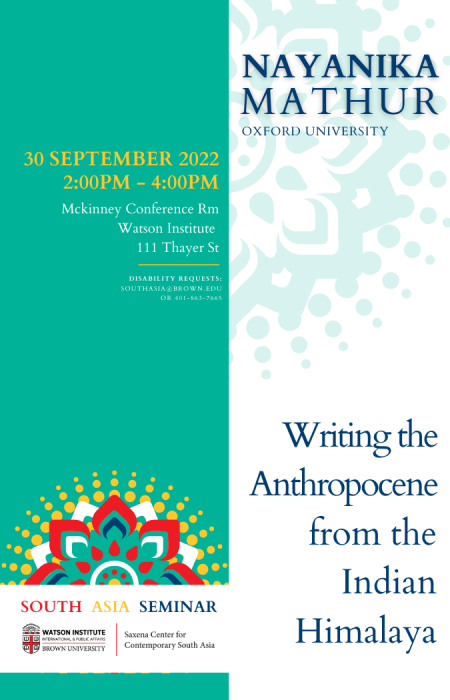 Nayanika Mathur is an Anthropologist of South Asia with wide-ranging research and teaching interests in the anthropology of politics, development, environment, law, human-animal studies, and research methods. She is the Director of Contemporary South Asian Studies Programme and Associate Professor in the Anthropology of South Asia. She attended the Universities of Delhi (B.A. and M.A.) and Cambridge (MPhil and PhD). Before joining Oxford in October 2017, she held postdoctoral research fellowships awarded by the Leverhulme Trust and the British Academy at the University of Cambridge. Mathur's books include Paper Tiger: Law Bureaucracy and the Developmental State in Himalayan India, was published in 2016 by Cambridge University Press as part of their ‘Law and Society’ series and Crooked Cats: Beastly Encounters in the Anthropocene, was published in 2021 by the University of Chicago Press.

Mathur is currently working on two new projects: The first project explores the relationship between technology and government, which builds upon her first book, Paper Tiger, and her abiding interest in bureaucracy, welfare, and techniques of government in South Asia but substantially extends it by moving into a study of utopia, technology, and the intersection of technocracy and politics. The second project is centered upon asking what the climate crisis does to the production of knowledge in anthropology specifically and the humanities and the social sciences more broadly. Some of these methodological and political concerns are found reflected in a research network at TORCH - climate crisis thinking in the Humanities and Social Sciences, which she co-directs.