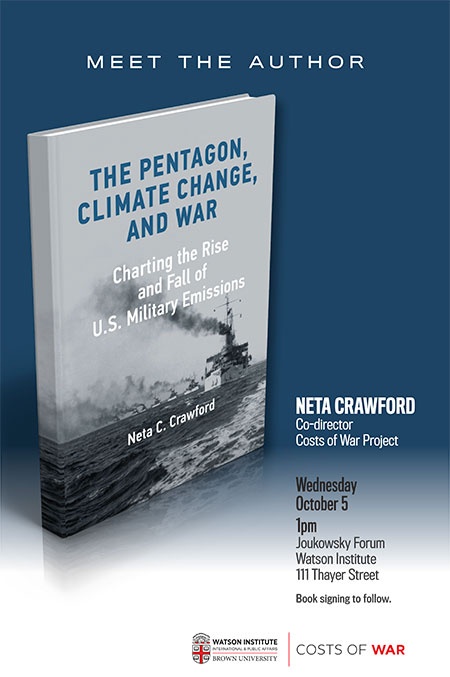 How the Pentagon became the world's largest single greenhouse gas emitter and why it's not too late to break the link between national security and fossil fuel consumption.

The military has for years (unlike many politicians) acknowledged that climate change is real, creating conditions so extreme that some military officials fear future climate wars. At the same time, the U.S. Department of Defense—military forces and DOD agencies—is the largest single energy consumer in the United States and the world's largest institutional greenhouse gas emitter. In this eye-opening book, Neta Crawford traces the U.S. military's growing consumption of energy and calls for a reconceptualization of foreign policy and military doctrine. Only such a rethinking, she argues, will break the link between national security and fossil fuels.

The Pentagon, Climate Change, and War shows how the U.S. economy and military together have created a deep and long-term cycle of economic growth, fossil fuel use, and dependency. This cycle has shaped U.S. military doctrine and, over the past fifty years, has driven the mission to protect access to Persian Gulf oil. Crawford shows that even as the U.S. military acknowledged and adapted to human-caused climate change, it resisted reporting its own greenhouse gas emissions.

Examining the idea of climate change as a “threat multiplier” in national security, she argues that the United States faces more risk from climate change than from lost access to Persian Gulf oil—or from most military conflicts. The most effective way to cut military emissions, Crawford suggests provocatively, is to rethink U.S. grand strategy, which would enable the United States to reduce the size and operations of the military.