The Noah Krieger '93 Lecture — Senator Chris Murphy: On The Future of American Democracy 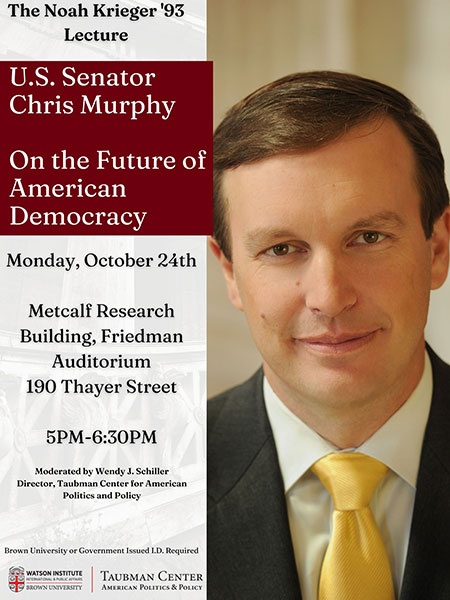 Join Taubman Center Director Wendy Schiller for a discussion with U.S. Senator Chris Murphy on the Bipartisan Safer Communities Act and the future of American democracy.

Chris Murphy, the junior United States Senator for Connecticut, has dedicated his career to public service as an advocate for Connecticut families. He has been a strong voice in the Senate fighting for job creation, affordable health care, education, sensible gun laws, and a forward-looking foreign policy. Following the tragic shooting at Sandy Hook elementary school in 2012, Senator Murphy became one of the leading proponents of commonsense reforms to reduce gun violence. He has championed a number of bipartisan bills aimed at expanding background checks and keeping guns out of the hands of criminals. He also led a bipartisan effort to reform our mental health system, working across the aisle to craft the first comprehensive mental health bill in the Senate in decades.