Pallavi Raghavan — Animosity at Bay: An Alternative History of the India-Pakistan Relationship, 1947-52 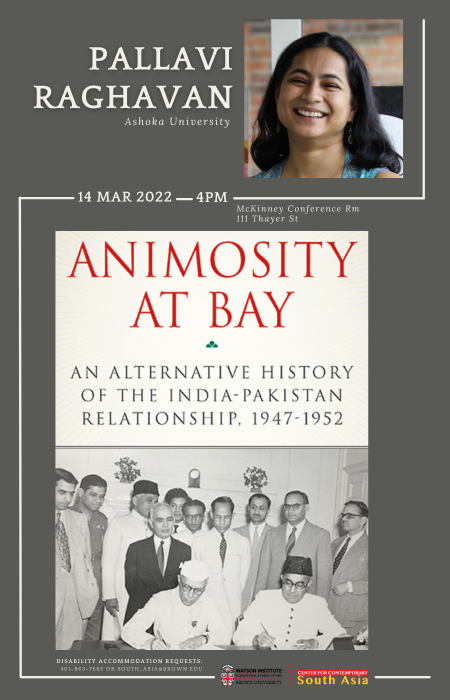 Pallavi Raghavan is assistant professor of international relations. Her book, titled Animosity at Bay: An Alternative History of the India-Pakistan Relationship, 1947 – 1952 was published in 2020, by Hurst& Co. (UK), and OUP (Global). For her next project, she is interested in developing a broader history of the British Empire’s theories of partition in the twentieth century.

Pallavi has published extensively in peer-reviewed journals, including The Economic and Political Weekly and Modern Asian Studies, and International History Review. She contributes frequently to news outlets such as The Wire and Scroll.in. She has previously taught at OP Jindal Global University and been a Fellow at the Centre for Policy Research, New Delhi. Pallavi holds a PhD in Modern South Asian History from the University of Cambridge.

About the Book:
Was a different outcome of the India-Pakistan relationship ever foreseeable? While disentangling this question, I will examine how the bilateral relationship between India and Pakistan was shaped in the shadow of the Partition, and argue that contrary to what might have been expected, the early stages of this relationship were marked with extended periods of constructive dialogue and cooperation. Examining the decision making processes behind the Nehru- Liaquat Pact of 1950, and a ‘No War Pact’ correspondence carried out between the two Prime Ministers the same year, I will highlight the nature of the basis of the assumptions behind these engagements, and contrast these to the ways in which the relationship is perceived today. My book examines the context in which the apparatus of the conduct of India’s and Pakistan’s international relations in the aftermath of the transfer of power was assembled, and argues that the imperative of state- formation itself was the constitutive element in the shaping of early acts of bilateral cooperation.