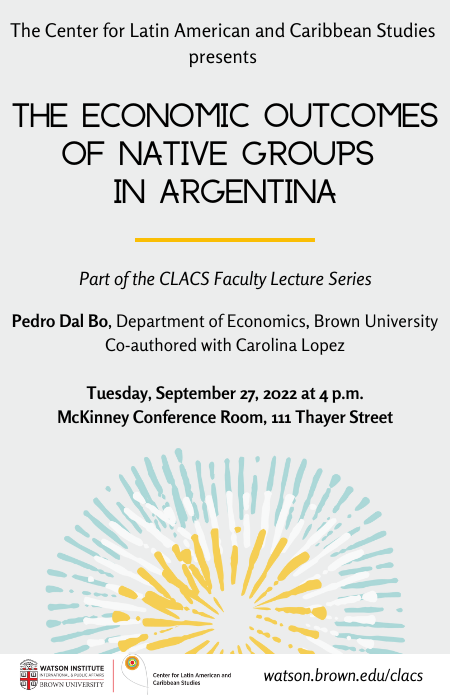 Join us as the CLACS Faculty Lecture Series continues with a talk on September 27 by Pedro Dal Bó of the Department of Economics. The talk, "The Economic Outcomes of Native Groups in Argentina," will be held in McKinney Conference Room, 111 Thayer Street at 4 p.m.

Pedro Dal Bó joined Brown University in 2002 and the PSTC in 2010. He is an applied theorist and economic experimentalist with primary interest in political economy. His population-related work includes a study of domestic violence and its relationship to mandatory enforcement with Anna Aizer (Economics), and an analysis on the role of voting in ensuring cooperative behavior with Andrew Foster (Economics). The latter was funded by the NSF.

Dal Bó regularly attends population-related seminars in applied microeconomics and race and inequality as well as occasional PSTC seminars. His interest and work in political economy and institutions more generally provides an important complement to the study of local institutions that is part of the population and development theme.