Pepper Culpepper — If the System is Rigged, Does it Matter? Media Coverage, Inequality, and Redistributive Preferences 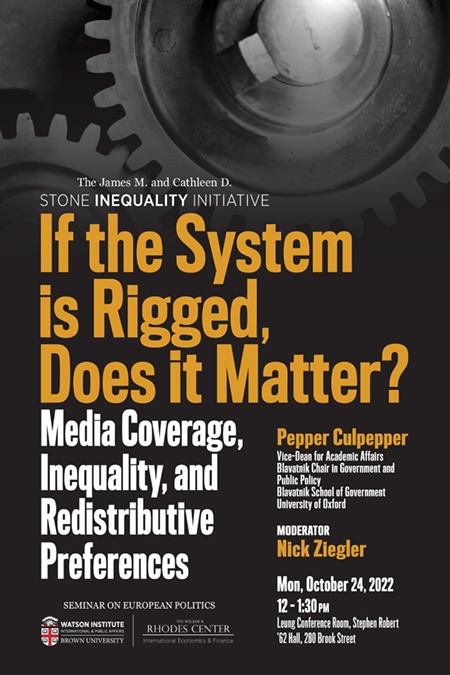 We know that financial scandals often have a dramatic effect on public opinion, but we don’t know how long the effect lasts, if it depends on varying media coverage, and whether it works differently in different countries. Based on a major study of backlash to the financial crisis of 2008, Pepper Culpepper (Oxford) and co-investigator Taeku Lee (Harvard) show that media coverage clearly pushes preferences toward more stringent regulation – but not in all countries at all times. Compared to major European banking countries, American preferences are uniquely impervious to media treatments emphasizing that inequality is a deliberate product of rules designed by wealthy elites. This research shows why and what it may mean for politics more widely.

Pepper Culpepper is Vice-Dean for Academic Affairs and Blavatnik Chair in Government and Public Policy at the Blavatnik School of Government. His research focuses on the intersection between capitalism and democracy, both in politics and in public policy. Prior to coming to the Blavatnik School, he taught at the European University Institute and at the Harvard Kennedy School. His book Quiet Politics and Business Power: Corporate Control in Europe and Japan (Cambridge University Press 2011), was awarded the 2012 Stein Rokkan Prize for Comparative Social Science Research. He is the author of Creating Cooperation (Cornell University Press, 2003) and co-editor of Changing France (with Peter Hall and Bruno Palier, Palgrave 2006) and of The German Skills Machine (with David Finegold, Berghahn Books 1999). His work has appeared in Comparative Political Studies, International Organization, Politics & Society, Socio-Economic Review, World Politics, Revue Française de Science Politique, Politische Vierteljahresschrift, West European Politics, Journal of European Public Policy, Journal of Public Policy, Business and Politics, and the Oxford Review of Economic Policy, among others. He has published commentary on public policy issues in the Washington Post, Le Monde, International Herald Tribune, and the New Republic. A former Marshall Scholar at the University of Oxford, he has also held long-term visiting appointments in France, Germany, and Japan.