Sanjay Kak — Archives of the Present: Witness in Kashmir and Palestine 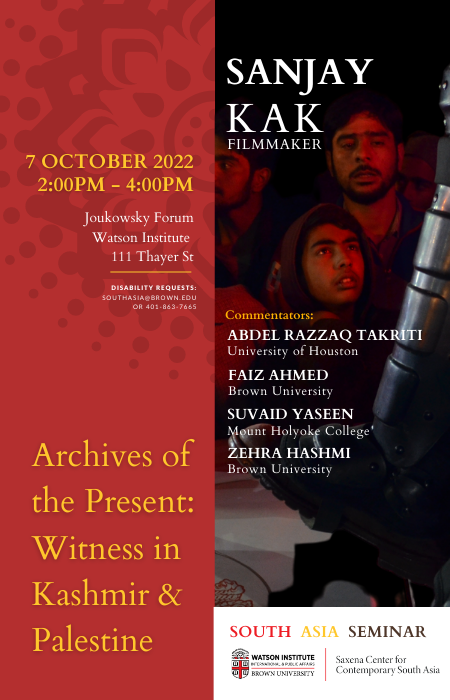 Sanjay Kak is a documentary filmmaker and writer based in New Delhi. His recent work on Kashmir includes the film Jashn-e-Azadi (How we celebrate freedom) 2007 and the edited volumes Until My Freedom Has Come - The New Intifada in Kashmir (Haymarket Books 2013) and Witness - Kashmir 1986-2016 / 9 Photographers (Yaarbal Books 2017).

About the Book: Witness, published by Yaarbal and edited by Sanjay Kak, in presenting select frames of nine of Kashmir’s leading and emerging photojournalists (there are other equally good photojournalists in Kashmir, the process of whose work to include in the book must have been like the framing of a photograph, it focuses on what is inside the frame, but what is excluded is as important), not only documents the period between 1986 and 2016 in the ever-turbulent valley, but also subtly joins in the search for answers to these questions and more. Early on, one of the more intriguing feature of the book that catches the eye is the fact that despite coming from very similar backgrounds and being subject to almost the same social and political forces, the photojournalists whose work appears in the book present an array of approaches to photography. Yet there are enough similarities to cast a hopeful net for an aesthetics of Kashmiri photography. They are all men, self-taught for the most part, with the period of armed insurrection and India’s bloody counter-insurgency playing a big role in shaping their personal and professional lives. Only Sumit Dayal can be considered an outsider, but only at first, until you realize that the political conflict in Kashmir is not always merely the solid objects in the photograph, but also the long shadows creeping into and out of those photographs, agitating the frame.