Student Q&A with Evan Wolfson, founder of Freedom to Marry 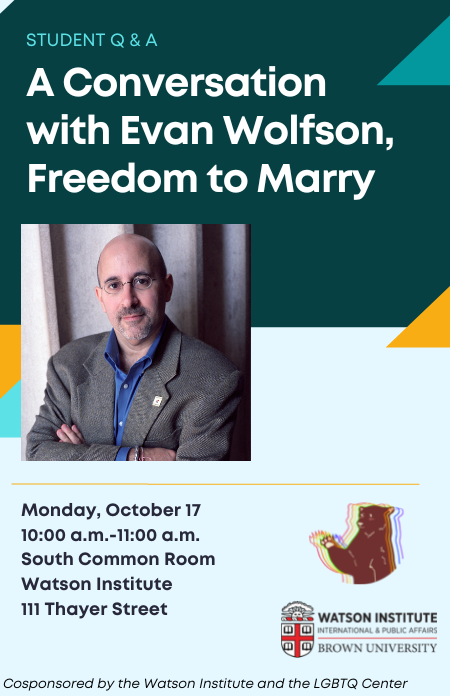 Students are invited to a Q&A with Evan Wolfson, founder and leader of Freedom to Marry.

Evan Wolfson founded and led Freedom to Marry, the campaign that won marriage in the United States, and is widely considered the architect of the movement that led to nationwide victory in 2015. In 1983, Wolfson wrote his Harvard Law School thesis on gay people and the freedom to marry. During the 1990s he served as co-counsel in the historic Hawaii marriage case that launched the ongoing global movement for the freedom to marry, and has participated in numerous gay rights and HIV/AIDS cases. Wolfson earned a B.A. in history from Yale College in 1978; served as a Peace Corps volunteer in a village in Togo, West Africa; and wrote the book, Why Marriage Matters: America, Equality, and Gay People's Right to Marry, published by Simon & Schuster in July 2004. Citing his national leadership on marriage and his appearance before the U.S. Supreme Court in Boy Scouts of America v. James Dale, the National Law Journal in 2000 named Wolfson one of "the 100 most influential lawyers in America." Newsweek/The Daily Beast dubbed Wolfson "the godfather of gay marriage" and Time Magazine named him one of "the 100 most influential people in the world." In 2012, Wolfson received the Barnard Medal of Distinction alongside President Barack Obama.

Having achieved in 2015 the goal he had pursued for 32 years, Wolfson now devotes his time to advising and assisting diverse movements and causes in the U.S. and around the world eager to adapt the model and apply the lessons that made the Freedom to Marry campaign so successful. Wolfson has taught law and social change as a Distinguished Visitor from Practice at Georgetown Law Center and as a Distinguished Practitioner in Grand Strategy at Yale University; serves as Senior Counsel at Dentons, the world’s largest law firm, with 190+ offices in 75+ countries; and, overseeing a fund housed at Tides Advocacy, directs a team of Freedom to Marry alumni/experts coaching human rights efforts worldwide under the banner of Freedom to Marry Global.

Cosponsored by the Watson Institute and the LGBTQ Center.