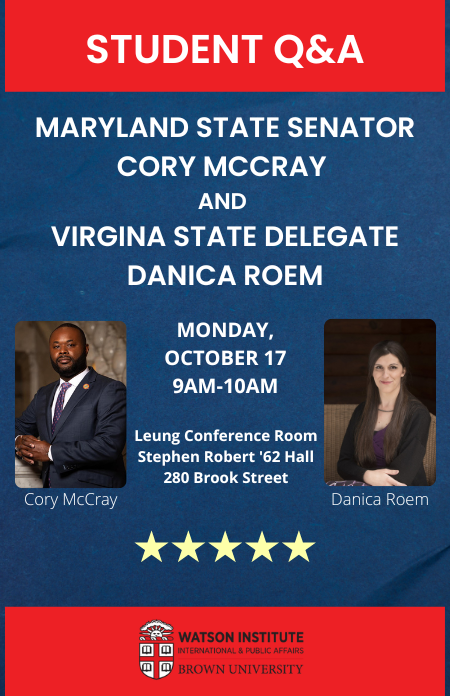 Coffee and pastries will be available.

Students are invited to a Q&A with Maryland State Senator Cory McCray and Virginia State Delegate Danica Roem. Learn about their work as legislators, and the paths they took to elected office.

Cory McCray was elected to represent the 45th Legislative District in the Maryland State Senate in 2018. Since that time, he has been named a “legislator to watch” by The Daily Record and Maryland Matters. Additionally, Cory also serves as First Vice Chair of the Maryland Democratic Party.

Virginia state Delegate Danica Roem represents western Prince William County and the City of Manassas Park in her third term as a member of the Virginia General Assembly. She spent 10.5 years as a newspaper reporter before unseating the self-described "chief homophobe" of Virginia in 2017 to become the first out-and-seated transgender state legislator in American history.

Danica also spent 12 years performing in heavy metal bands, playing shows in the Mid-Atlantic, Northeast, Midwest, Northern Ireland and Scotland. She ran a her own mobile yoga studio set to a heavy metal soundtrack in 2014 and is now the executive director of Emerge Virginia, where she trains Democratic women to run for office. Danica is also now running for the 30th District of the Virginia state Senate in 2023.