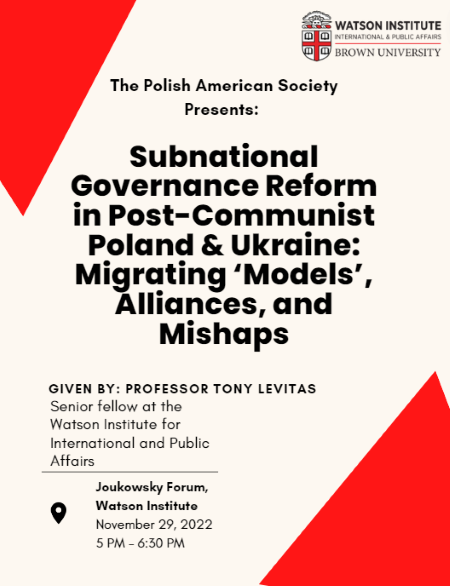 The Polish American Society presents a lecture by Watson Senior Fellow Anthony Levitas. In this talk, Tony Levitas will discuss the role, place, and importance of local government reform in Poland’s post-communist transition, as well as how Ukraine has been trying to adapt the ‘Polish model’ of subnational governance for its own purposes, and the cooperation between subnational reformers in both countries before and after the Russian invasion of 2014 & 2022.

For thirty years, Tony has provided analytical and political advice on local government reform to elected officials and civil servants in post-communist Europe. Most generally, he helps policy makers decide what responsibilities sub-national governments should have and where they should get the money to pay for them. More particularly, he helps design predictable and equitable transfer systems and to draft the laws and regulations that govern local taxation, budgeting, investment planning, financial reporting, and sub-sovereign debt. He has also worked extensively on school finance and governance. Tony played important roles in major local government reform programs in Poland, Macedonia, Serbia, Bosnia and Herzegovina, Albania and most recently Ukraine.