Summer of Soul - A Conversation with Questlove 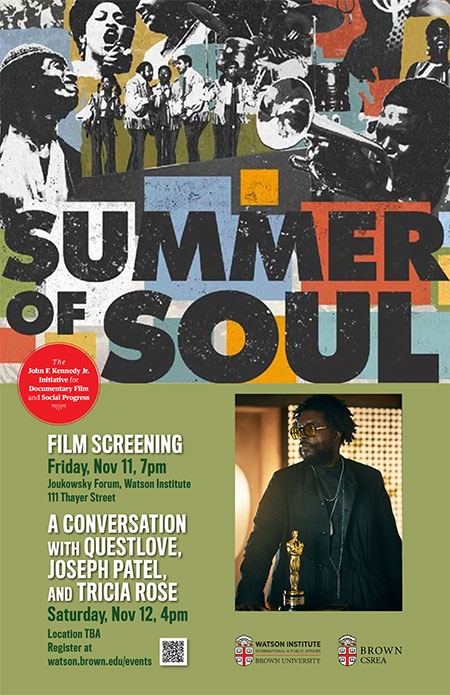 Tickets are now sold out.

The John F. Kennedy Jr. Initiative for Documentary Film and Social Progress at the Watson Institute for International and Public Affairs is proud to present Professor Tricia Rose in conversation with Questlove and producer Joseph Patel. They will be discussing the Academy Award winning documentary Summer of Soul.

In his acclaimed debut as a filmmaker, Ahmir “Questlove” Thompson presents a powerful and transporting documentary—part music film, part historical record created around an epic event that celebrated Black history, culture and fashion. Over the course of six weeks in the summer of 1969, just one hundred miles south of Woodstock, The Harlem Cultural Festival was filmed in Mount Morris Park (now Marcus Garvey Park). The footage was largely forgotten–until now. SUMMER OF SOUL shines a light on the importance of history to our spiritual well-being and stands as a testament to the healing power of music during times of unrest, both past and present. The feature includes concert performances by Stevie Wonder, Nina Simone, Sly & the Family Stone, Gladys Knight & the Pips, Mahalia Jackson, B.B. King, The 5th Dimension and more.

Summer of Soul will be screened on Friday, November 12 at 7 p.m. in the Joukowsky Forum, 111 Thayer Street. Or watch on Disney+ or Hulu.

Cosponsored by the Center for the Study of Race and Ethnicity in America.

Tricia Rose specializes in 20th century African-American culture and politics, social thought, popular culture and gender issues. She is the author of Black Noise: Rap Music and Black Culture in Contemporary America (1994), Longing to Tell: Black Women Talk About Sexuality and Intimacy (2003) and The Hip Hop Wars: What We Talk About When We Talk About Hip Hop and Why It Matters (2008). Black Noise won several awards including an American Book Award from the Before Columbus Foundation. She has been awarded such prestigious fellowships ad the Princeton University's Afro-American Rockefeller Postdoctoral Fellowship and the American Association of University Women Fellowship.

Joseph Patel is an award-winning producer, director, and writer on documentaries and short films. He recently produced the feature documentary SUMMER OF SOUL (…OR, WHEN THE REVOLUTION COULD NOT BE TELEVISED), directed by Ahmir “Questlove” Thompson, winner of the Academy Award for Best Documentary Feature.

Patel began his career as a music and culture journalist. He produced and directed television and digital content for MTV News & Docs and Vice Media and later served as Creative Director at The Fader and Vevo. Patel is directing an upcoming documentary based on the best-selling book Contact High: A Visual History of Hip-Hop.

Academy Award-winning filmmaker, drummer, DJ, producer, director, culinary entrepreneur, New York Times best-selling author, and member of The Roots – Ahmir “Questlove” Thompson, is the unmistakable heartbeat of Philadelphia’s most influential hip-hop group. He is the Musical Director for The Tonight Show Starring Jimmy Fallon, where his beloved Roots crew serves as house band. Beyond that, this 6-time GRAMMY Award winning musician's indisputable reputation has landed him musical directing positions with everyone from D'Angelo to Jay-Z.