Symposium | Algeria, from Revolution to Independence: A Visual Inquiry 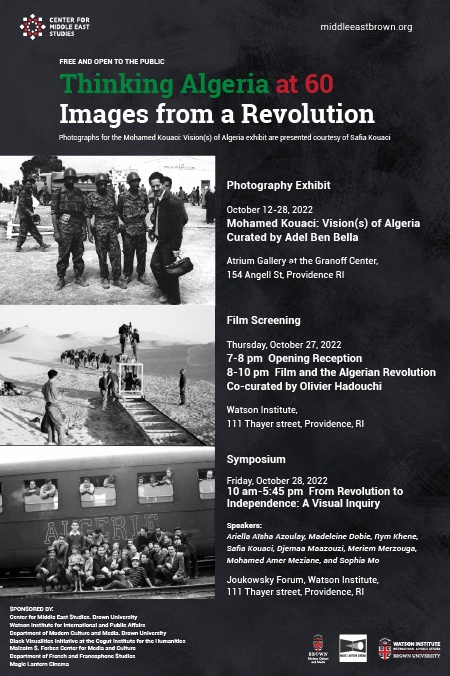 July 5, 2022, marked 60 years since Algeria's independence. This anniversary is most likely one of the last major celebrations of this history to take place with a significant number of witnesses and participants still present to tell their story of Algeria. This important milestone takes place within a tense yet galvanizing political context in Algeria, one that saw the Hirak movement succeed in toppling President Abdelaziz Bouteflika’s regime (1999-2019). This anniversary is also inscribed within an unresolved history with lingering consequences in France and Algeria of the legacy of 130 years of brutal and discriminatory colonization. The symposium will feature scholars, artists, and actors of this history in a multifaceted conversation on the instability and constant evolution of recent Algerian history and the way it is narrated. We think from and towards images, engaging with Algeria as a set of visual materials from the early days of the revolution to more recent events such as the Hirak protest movement. Scholars and artists are invited to explore questions related to or inspired by the exhibit. Thinking with, through, and against images allows us to unsettle the coercive and violent ways photography and visuality were used through the colonization of Algeria. We wish to reflect on the construction of modern Algeria through the tensions and potential avenues encapsulated in the terms “revolution,” “independence,” and “decolonization” through a visual conversation.